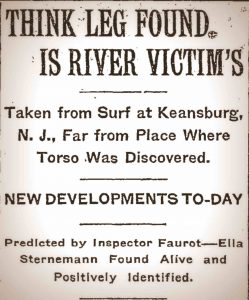 Taken from Surf at Keansburg, N. J., Far from Place Where Torso Was Discovered.

A section of a human leg fourteen inches long, extending from the thigh to below the knee, found floating in the surf yesterday in front of Morris’s Pavilion, at Keansburg, N. J., is believed by the authorities of Hudson County, N. J., to belong to the dismembered body of a woman of which the torso has been recovered in two parts from the Hudson. Keansburg is about twenty miles from Woodcliffe, N. J., where part of the body was recovered.

H. C. Fay, Coroner of Monmouth County, who took charge of the find, said last night that the bone had been sawed through and that the work resembled that displayed in the dismemberment of the body in the Hudson County case. The size of the thigh, according to Coroner Fay, seemed to show that the victim was short. No identification marks appeared on the skin.

Inspector Faurot, in charge of the detectives searching for traces of the murderer in this city, said last night that several clues on which his men were working had come to nothing, but that they were all concentrating their efforts on the most promising lead that remained. The Inspector predicted important developments to-day.

The task on which Inspector Faurot’s men are now engaged is believed to be that of tracing the purchaser of the pillow in which the upper part of the torso of the dismembered body was hidden. The pillow was sold by George Sachs, a furniture dealer at 2,762 Eighth Avenue, who had in stock the only twelve pillows ever manufactured of this size and material. Sachs had sold only two of these pillows, and the detectives yesterday found the woman who bought one of the pillows and satisfied themselves that she was in no way connected with the crime. If the other pillow can be traced, the detectives believe that the identity of the murdered girl and her slayer will be found without much difficulty.

Peter H. Sternemann, the milliner, who has sent many letters by special delivery to the authorities on both sides of the river, insisting that that murdered woman is his daughter, Ella, visited Volk’s Morgue in Hoboken yesterday. After viewing the mutilated remains recovered from the river he said that he thought he recognized the body as that of his daughter.

While Sternemann was in the morgue at Hoboken work came that his daughter, Ella, had been found and was alive and well. When this intelligence was communicated to the old man, he said with surprise, “That’s funny,” and went on incoherently to recount reasons why he thought the news could not be true. The discovery that the girl was alive was made through New York detectives, Inspector Faurot said:

“Ella Sternemann called at the home of John Ruthman and Anna Ruthman, her uncle and aunt, at 1,582 Silver Street, Fresh Pond, L. I., this morning. She admitted her identity and was positively identified by her uncle and aunt.

“The young woman, who is 20 years old, was taken to the Ruthman home by Detective William J. Maher of the Glendale Station, Long Island. She is working as a servant, but I cannot disclose the address. She says she left her home because her father wanted too much of the money she earned. After she was positively identified, she returned to the place where she works.”

Magistrate Corrigan in the Men’s Night Court committed Peter Sternemann to the psychopathic ward at Bellevue last night for observation for ten days. Sternemann was persuaded to go to Night Court by detectives who urged him to apply for a permit to carry a revolver to protect himself against persons who, he said, were trying to murder him. Sternemann made no objection when the Magistrate ordered him to Bellevue.