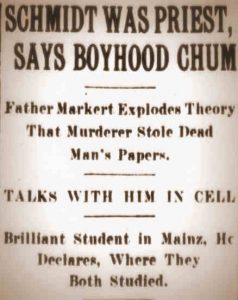 Brilliant Student in Mainz, He Declares, Where They Both Studied.

Hans Schmidt, the murderer of Anna Aumuller, was a priest, and not a lay-man who, as many suspected, got possession of the credentials of a dead priest and masqueraded as one for the purpose of cloaking his crimes.

This fact was established at the Tombs yesterday Afternoon by Father Francis Markert, S.V.D., a professor in the College of Chicago, who identified Schmidt as a boyhood friend and fellow student at Mainz, Germany, and the Hans Schmidt who went out into the world as an ordained priest.

Father Markert came from Techny at the request of Father Luke J. Evers, the Catholic chaplain at the Tombs, who has said that he would not believe that Schmidt the prisoner was Schmidt the priest until somebody who really knew the latter was able to identify him beyond doubt.

When Father Markert reached the corridor where Schmidt was exercising he kept out of sight of the shuffling groups of men for a minute or two until Head Keeper Cummings called Schmidt over to the gate. Then he stepped in front of the prisoner. Schmidt recognized Father Markert instantly and extended his hand.

“Hod do you do, Hans?” said Father Markert in German. “You know me, do you not?”

“Is there any message that I can deliver to your parents for you?” asked the visitor. “If there is anything I can do for you I will gladly do it.”

“There is nothing special,” returned Schmidt, “except give my best regards to my mother.”

“I have known Hans Schmidt since 1893,” said Father Markert last night. “He was about 12 years old when I first knew him. He was a city boy and I was a country boy, and frequently he used to visit his aunt who lived opposite our house about seven miles from Mainz.

“He was a very good boy and I remember that he used to bring me presents. We entered together the Gymnasium at Mainz on September 16, 1895. It is a classical college. He was one of the most brilliant students in the college and ranked very high in his studies.

“As a boy he was very pious, but when he got to be about 20 years old he began to show a worldly disposition. The last two years of his studies he was at Schlettstadt. I think he was in college until 1899 or 1900.

“After finishing his studies at Schlettstadt he entered the seminary at Mainz, where he remained two years. Then he got permission of the Bishop of Mainz to study at Munich. Later he sent me a copy of a paper which stated that he had been graduated as a doctor of philosophy. He returned to the seminary at Mainz and was ordained on Christmas, 1906 or 1907. I was in Vienna at the time.

“I saw Hans Schmidt last at Gonzanheim, near Mainz. That was in 1908. He was acting as an assistant priest. A few weeks later I heard that he had left Gonzanheim. There was a rumor that his disappearance was the result of a forgery of documents about the degree of doctor of philosophy. I wrote to Hans Schmidt’s brother about the rumor, saying that it wasn’t true it should be killed off, but he wrote back that there was something to it. That was in 1909. The brother told me Hans had been sent to a sanitarium.

“I finished my studies at Vienna in 1910 and before starting for America I paid a visit to Schmidt’s parents. They told me that their son had not written to them for a year and a half and asked me to look him up in this country. The address that they gave me was Trenton.

“I sent Schmidt a postcard at Trenton inviting him to meet me at the steamship pier in Hoboken, but he didn’t come. I was not sure at the time that he was acting as a priest. In Germany he had been known as Prof. Schmidt.

“Later from Techny I sent him another card on June 20, 11910, and in reply he mailed me a letter in which he asked me not to look him up any more, saying that he intended to go West. I didn’t write a letter back because of his request.”

Father Markert is editor of the Amerik Familienblatt.

Alphonse G. Koelble, Schmidt’s attorney, has asked Assistant District Attorney James A. Delehanty to have the State employ two alienists on behalf of the defence to examine Schmidt. If Koelble does not interpose objections, it is said, Schmidt will be taken to the Morgue, probably to-morrow, to look at the parts of the body of his victim, Anna Aumuller. The alienists may go to the Morgue too to observe Schmidt’s actions.