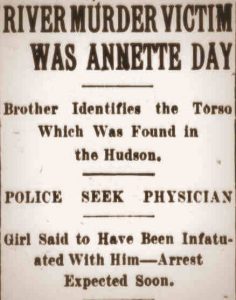 Brother Identifies the Torso Which Was Found in the Hudson.

Girl Said to Have Been Infatuated With Him – Arrest Expected Soon.

The parts of the body of the young woman who was murdered, cut up and the remains scattered in the Hudson River have been identified as those of Miss Annette Day, 23 years old, of 206 Union Street, Brooklyn. The identification was made last night by Francis D. Day, her brother, who is a real estate agent with offices at 109 Broad street, Manhattan.

The identity of her alleged slayer is known to the police, who are searching for him. He is said to be an Italian physician with whom the girl was infatuated. The girl’s relations with the physician had been such, according to the brother, that she would have been a mother in a few months.

The police expect to arrest the physician to-day and thereby clear the mystery which has baffled them for a week. It is believed that the police know where he is.

The girl is described by her brother as 5 feet 1 inch tall, weighing about 96 pounds, dark brown hair, blue eyes, light complexion, two gold teeth in the upper row. She was dressed at the time of her disappearance on August 8 in a cream colored dress with a small black stripe and white velvet trimmings, a fine grade of black straw hat, black shoes and stockings, and wore a small watch on her breast.

She had gone to Tarrytown with her mother on August 6. Two days later she disappeared. She was employed as a machine operator in a petticoat factory in Manhattan. Her father, Francis, is dead, but her two brothers, Salvatore and Francis, and her sisters, Emma and Mary, are living.

The brother Francis after his sister’s disappearance conducted a personal search for her before he asked the aid of the police. When he read the account in the newspapers of the torso found in the river he called at the morgue several times, but it was not until last night that he viewed the remains and made a positive identification. He explained that on several occasions he had seen the peculiar birthmark on his sister’s back.

“My sister loved this Italian physician,” Francis Day told the police. “It was a hopeless love, but she did not realize it until too late. That was about a year ago. She confessed her relations with the physician. She would have become a mother within a few months. The physician fled to California. He returned about a month ago. Then my sister disappeared. We have not heard from her since.”

On Thursday the brother, accompanied by a detective from the Butler street police station in Brooklyn, made an attempt to have the druggist who sold the tar paper believed to be that found around the torso identify the prisoner [sic].

The young man carried a large group picture. In it was the physician, a member of the graduating class of 1911 of the Long Island College Hospital.

Little was learned of the doctor in the neighborhood where he lived. Some of his neighbors told of a romance in which a young girl, believed to be the murder victim, tried to get the physician to divorce his wife and marry her. This, it is understood, the physician refused to do.

Detective Clinton Wood of Assistant District Attorney Deacon Murphy’s office called at the morgue in Hoboken yesterday and gathered together all the evidence which has been found. Photographs of the various parts of the body, the chemise around the first part of the torso, the undershirt which was found stained with blood. the pillow and the pillow slip with the embroidered “A” on it were all brought over to Inspector Faurot’s office in Police Headquarters.

Chief Marcy of the North Bergen police in New Jersey spent most of yesterday working on a motor boat clue. It was learned that a motor boat usually anchored in North Bergen disappeared a few days before the time when the crime is believed to have been committed. A few days ago the boat was seen again in its usual place, but in it was found a bloody shoe. It is said. The owner of the boat was a prominent man, Chief Marcy’s office admitted.

Several conferences were held yesterday in the Hoboken morgue. After the last conference, held about 2 o’clock in the afternoon, the detective got into an automobile and hastened away. They refused to tell where they were going, but observed an air of mystery. It was the first time they appeared to be working on anything definite.