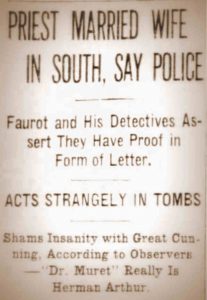 Faurot and His Detectives Assert They Have Proof in Form of Letter.

Hans Schmidt, the priest who killed Anna Aumuller and dismembered her body, threw off his coat and outer shirt in his cell in the Tombs yesterday and would not put them on again, even to exercise in the corridor. Inspector Faurot called his actions “the business of trying to appear insane.”

Detectives at work on the murder case last night said they were in possession of evidence through which they would be able to prove that Schmidt married a woman in Louisville, Ky. The clue to the wife, it was said, was found in a letter taken from the priest’s room in the rectory of St. Joseph’s Church. The letter was mailed in Louisville, and the woman wrote in affectionate terms calling the priest “husband.” From it the police deduced the following:

‘That in 1910, when Schmidt returned to this country after a trip abroad, he occupied a stateroom on a ship with a woman who now lives in Louisville and who posed as his wife. That this woman believed Schmidt was a professor of philosophy who was about to enter upon an American career in one of the big Eastern universities; that the priest later wrote to the woman and said that when he got enough money he would send for her and introduce her to his friends here as his wife.

Inspector Faurot telegraphed the Louisville police and asked them to find the woman, if possible. This will be a difficult task, as the letter bore only the woman’s given name.

The police are investigating the possibility that Father Schmidt was related to Johann Hoch, the Chicago “Bluebeard” who married at least a dozen women and who was hanged for the murder of one of his wives in Chicago eight years ago. The police learned that Hoch’s real name was Johann Schmidt, and that he came from Mainz, Germany, and bore a strong facial resemblance to Father Schmidt.

Isidor Plotke, the attorney who defended Hoch, last night said Hoch was much like the priest.

“Hoch told me,” Plotke said, “that he had brothers and sisters in Mainz, Germany. I have examined photographs of Father Schmidt, and if he wore a moustache I might almost take him for Hoch.”

Inspector Faurot yesterday said he did not take seriously the talk of the priest in regard to his aim to rid the world of cripples, the old and infirm and others who found their lives burdensome, but who lacked the courage to commit suicide.

The inspector, who directed the work that led to the priest’s arrest for the murder of Anna Aumuller, maintained that this talk was a part of Schmidt’s effort to create a belief that he was insane.

Faurot also laughed over the “blood sacrifice” of the priest’s victim, and said he believed that Schmidt did not drink of the woman’s blood, but that the priest conceived the story in his cunning. Faurot said that when Schmidt killed the girl he went immediately about the dismemberment of the body in a businesslike way. He was inclined to believe, he said, that when recovered the head would show that the woman was shot.

The priest’s counsel, Alphonse G. Koelble, asked his client yesterday if he shot Anna Aumuller. His reply, according to Koelble, was:

Koelble said he believed the District Attorney would try to show that Schmidt killed the woman before trying to cut her up, and thus shatter the very foundation on which the defense hopes to erect its insanity defense. Koelble said that one of the acts of the priest which would be used to strengthen the insanity plea would be that he gave medicine made up of lentils to ignorant women.

The priest told Koelble yesterday, the lawyer said, that the book of death certificates found in his room, with one certificate missing, was stolen from a physician, whose name the lawyer refused to reveal. The priest explained the missing blank by saying that it was gone when he came into possession of the book. The police said the book was not stolen from Dr. John J. Slevin, of No. 47 East 126th street, as was reported.

The priest, Koelble said, was angry by reason of statements in the newspapers which he regarded as false. One of the statements that put the priest into a rage yesterday was a message from England which said he was arrested in London in 1902 as a forger.

“I was not in England then,” Schmidt asserted, according to his lawyer.

Two women of St. Joseph’s parish, according to Koelble, wrote sympathetic letters to the former assistant curate yesterday. The writers offered their sympathy to the prisoner, and said they would visit him but for the fear that they would receive newspaper notoriety.

Schmidt’s counterfeiting accomplice, “Dr.” Ernest A. Muret, as he prefers to be known, kept to his cell and did not mingle with the prisoners in the exercise corridor like the priest.

Yesterday Muret received reporters in his cell and characterized as “rot” the dispatches from Germany and England which painted him as a swindler and “white slaver.”

By turns Muret was pleading and defiant. He bemoaned what he called hard treatment at the hands of the press, and threatened to sue for libel every paper that printed any “false” statements about him. Then he posed as a wronged man who wanted to tell all he knew, fearing nothing, and again he would refuse to answer any questions.

The bogus dentist, however, showed an inordinate vanity, and when the questions became too embarrassing he withdrew into the dark recesses of his cell and said:

“You will have to excuse me, gentlemen. I have said all I care to say for the present. I will explain all at the right time.

“I consider it entirely unnecessary to say,” began Muret, blinking his steel blue eyes, while he fingered a gold chain that hung across his fancy waistcoat, “that this case against Schmidt is worked up by the newspapers in a manner calculated to satisfy the morbid nature of the people. It is unbecoming of the newspapers in view of the fact that children and women and young people must read it.

“In so far as it concerns me, I think the statements are unfair. But time will prove that they are wrong and I am right. All my life I have been hard working, devoting much time to study, and everything in my history will prove ultimately that I am a wronged man. Some of these false statements have been disproved. Others will be disproved in time.”

“How long have you known Schmidt?” he was asked.

“Only since last December,” he replied. “Most of the time we were together we talked about history, and sometimes, but very little, about philosophy. Schmidt always seemed good natured and harmless until the middle of August. Then he began to talk constantly about religion.

“At first he said he wished he had the means to build a church to St. Elizabeth. This I thought excellent, but the next time we met he spoke about Christ and said wouldn’t it be a fine thing to suffer like Christ did. He said he would not mind being crucified like Jesus in order to do something for his religion. Whereupon I answered him that he must be out of his mind.

“I know Miss Harris, of London, and, as she has stated in the cable dispatches, she is not my wife, only a good friend. It is true that I loved her, but her mother would not let us marry. The story her mother tells is true, word for word.”

“Did Schmidt ever talk to you about his love affairs?”

“Never. I knew nothing about his women friends. I did not know he ever had an apartment.”

“How often did he visit you after the murder?”

“Twice, or maybe more. I am not sure. But he never mentioned anything about it to me, or I to him. I did not know Anna Aumuller.”

Muret said he knew nothing about Schmidt’s counterfeiting schemes, although Schmidt has said Muret warned him against it. He accounted for the presence of the bond paper from which the counterfeits were printed, which was found in his rooms, as being “just paper to write on.”

Muret was asked about his antecedents. Then he became angry. He struck a theatrical pose and said:

“I have been informed that Inspector Faurot and his detectives have given out statements concerning my history, I protest against it.”

A cable message from Berlin, which said his real name was Herman Arthur and that he was a swindler, was shown to him.

“Rot!” he exclaimed. “That Young Men’s Christian Association card in Arthur’s name was given to me by himself. He came to me as he would to any notary public. In fact, you will find that many of these papers by which the police are trying to prove I used other names were given to me by clients.”

But questions as to who Herman Arthur was, where he lived, and where he came from, met with these answers:

“I do not know. I have forgotten. My papers, not in the hands of the police, will show.”

The word police suggested another question, which met with this response from the ready Muret:

“At Police Headquarters they gave me their word of honor that they believed I had no connection with the murder at all.”

“When did you come to this country?”

“When in Chicago did you go under the name of Dr. A. Held?”

Muret ruffled his hair and assumed an attitude of deep thought. Then, after a long pause, he answered:

“where were you born?”

“I don’t think I should answer. If the newspapers want a history of my life I think they should pay for it.

Being pressed, he answered:

“I was born in Chicago. At the age of three I went to Germany. My father was German and my mother was French.”

“What is your real name?”

“Did you ever use another name?”
“Never, except in London, when I was teaching German in the Hugo language school. They used my first name, spelling it Ernst, as my last, to make it appear German.”

Inspector Faurot last night said he expected to arrest a woman as a material witness today. He said he found a person living at Englewood, N. J., who saw Father Schmidt throw the bundles containing the dismembered portions of Anna Aumuller from a Fort Lee ferryboat.

Requests for an interview brought from Father Schmidt yesterday the following message:

“I am physically unfit to give an interview.”

An investigation of Schmidt’s ecclesiastical credentials, it was learned yesterday, was made by the authorities of this diocese of the Roman Catholic Church, as a matter of form, when Schmidt first applied for admission to St. Boniface Church.

“We investigated his credentials at the time he came here,” said Monsignor Lavelle, rector of St. Patrick’s Cathedral, yesterday. “Of course we found nothing wrong with them. As for the dismissorial papers, which the police say were found in his effects. I know nothing of the use to which he put them. We have all been very much annoyed by the questions which have arisen since Schmidt was arrested, and I have said everything there is to say about him. I will have nothing further to discuss about the case.