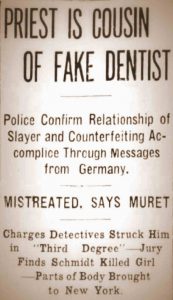 Police Confirm Relationship of Slayer and Counterfeiting Accomplice Through Messages from Germany.

Hans Schmidt, the Roman Catholic priest who has confessed to the murder of Anna Aumuller and “Dr.” Ernest Muret, his friend and alleged counterfeiting accomplice, are cousins, according to information obtained from Germany yesterday by the police. Muret’s real name, the German messages said, is Adolf Mueller.

Notwithstanding the remarkable likeness of the two men and the news from their birthplace, they continued to deny that any blood relationship existed.

While in London Muret, as Dr. Ernst, got into trouble with the police and fled the country. The medical associations were after him for practicing without a license and Scotland Yard detectives had him under suspicion as a “white slaver” and a dealer in indecent pictures.

Muret, or Mueller, who was a merchant in Mainz, was well known in Schmidt’s home town, Aschaffenburg and the men were close friends. The last heard of Schmidt’s cousin was when he went to Hamburg, a town that figures on the fake dentist’s wanderings.

Schmidt’s defense will be insanity, his counsel, Alphonse G. Koelble, said last night. And that Schmidt’s cousin, Muret, will help to bolster up the insanity defense was evident from a statement that Muret, of Mueller, issued from his cell last night.

In this statement the fake dentist, after complaining of a “third degree” at the hands of the police, said he quarreled with Father Schmidt last month because he (Muret) told the priest he was crazy. Muret said at that time Schmidt talked about St. Elizabeth being with him and that he wanted to be a second Messiah.

“I then called Schmidt crazy, and he was sore at me,” Muret said.

This statement of Muret did not come as a surprise to Inspector Faurot, for he expected something like this, in view of the friendship of the two men and the efforts of Schmidt at all times to try to clear Muret of any implication in his counterfeiting work.

The police have not given up their task of trying to connect Muret with the murder of Anna Aumuller. When he was arrested and taken to police headquarters Muret said in his statement he was charged with knowledge of the murder and when he denied that he knew anything about it he was him in the chest and back.

The case of Schmidt will not go to the grand jury until early in October. District Attorney Whitman yesterday asked Judge Foster if he could try the case toward the end of next month, and Judge Foster replied that this would be agreeable to him.

The District Attorney is preparing to fight any attempt on the part of Schmidt’s counsel to have the murderer declared insane. Mr. Whitman is confident that whether a commission of lunacy or a jury of laymen is appointed by Judge Foster to determine Schmidt’s mental condition, the verdict will be that he is sane, and then the fight for the priest’s life will begin in Part V of General Sessions.

District Attorney Whitman probably will insist upon a jury of twelve men, as in the case of Joseph G. Robin, who was declared sane by the jury after a dozen alienists testified that he was insane.

No Proof of Death.

Koelble hinted that in the event of the priest having to stand trial a probable defense would be that the authorities have no proof that Anna Aumuller is dead.

“The police have not determined that the dismembered torso and right thigh in Volk’s morgue are those of Anna Aumuller,” Koelble said last night. “They have no identified the body as that of the priest’s sweetheart, and I don’t think that the identification of Annie Hirt, the friend of Anna Aumuller, will stand in court. It will be recalled that she identified the body by a mark on the right breast. Yet she  said she never knew of the peculiar birthmark on the Aumuller girl’s shoulder.”

While the police are satisfied with the identification, they are dragging for the head in the Hudson River in the neighborhood of 152d street, where a fisherman brought a tuft of hair up on his hook on Tuesday afternoon. This hair has been identified by Annie Hirt as Anna Aumuller’s.

The police are confident that they will find the head in the Hudson River at that point. Schmidt admits that he threw the head into the river from a Fort Lee ferryboat, and the police believe that the tide worked the head a mile or so upstream, near where the fisherman’s hook caught it, and brought up a few strands of the hair.

The police are trying also to find Helen Green, who formerly lived at the Hillel apartments, No. 201 West 109th street. Father Schmidt yesterday said that she was only a casual acquaintance, despite a love letter addressed to him under the alias of “Van Dyke,” which was found in the raid on Muret’s apartment Wednesday night.

The young woman rented a room from Mrs. Brent, in apartment No. 12, at the above address, for two weeks in January, at about the same time Schmidt, posing as A. Van Dyke, had a room in West 84th street.

Mrs. Brent said all she knew of Helen Green was that when she left she said she was going to Chicago, and asked that her mail be forwarded to “general delivery.” The Chicago police are searching for her at the request of Inspector Faurot.

Inspector Faurot is making an effort to find out just where and when Father Schmidt used the aliases of “Adolf Somers” and The Rev. John P. Schmidt.” That he used these names is evident from cards found in Muret’s flat and from correspondence now in the hands of the police.

Muret pleaded guilty to the charge of violating the Sullivan law in Special Sessions yesterday. He was remanded to the Tombs until October 2. Muret told the court that the revolver “couldn’t do any harm,” and offered himself as a target to prove his contention.

It was after Muret’s arraignment that reporters sent a note to his cell asking for an interview. His answer was a penciled statement, which follows:

“I cannot see any of you at present, because I am, on account of the maltreatment at Headquarters, ill. I am coughing blood. This is enough for today. I shall be pleased if you will send me a good fountain pen. I am without funds to buy one.”

“I was hit against chest and back when I denied that I knew anything about the murder or the counterfeiting. Torturing prisoners has not yet been abandoned by the New York police. The hissing between the teeth of Detective Cassassa, ‘I will knock your head off before I get through with you.’ is still ringing in my ears.”

Inspector Faurot last night said he was sure Schmidt and Muret were old acquaintances, as well as blood relatives. He said he hoped before long to prove that they were confederates in crime in Europe, and that the statements of the two that they had known each other only ten months would be shattered.

Last night the police brought the meager furnishings of the flat at No. 38 Bradhurst avenue, where Schmidt murdered the girl, to Police Headquarters. At the same time the police of the West 125th street station learned that on April 30 Schmidt had photographic copies made of a death certificate, such as issued by the Board of Health, at the studio of Lee & Beach, No. 49 Manhattan avenue.

Schmidt is believed to have used these plates as the basis for printing counterfeit death certificates, for a number of them were found among his effects.

At the inquest held yesterday by Coroner William Schlemm, in Jersey City, the jury found that the torso and thigh taken from the Hudson River were parts of the body of Anna Aumuller and that the woman came to her death at the hands of Hans Schmidt. The jury praised the work of Inspector Faurot.

The jury recommended that the torso and all other evidence in the possession of the New Jersey authorities be turned over to the New York authorities, and this was done later in the night.