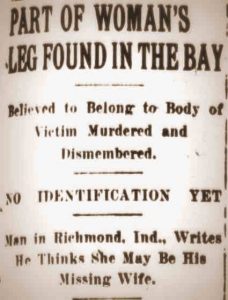 Believed to Belong to Body of Victim Murdered and Dismembered.

Man in Richmond, Ind., Writes He Thinks She May Be His Missing Wife.

What may be the upper part of the right leg of the victim of the Hudson River murder mystery was picked up yesterday afternoon on the beach at Keansburg, N. J., on the southern shore of New York Bay inside the Hook. It was found by Norman Carhart and Irving Andrews of Morris’s Pavilion at the foot of Main street.

The section was nude and came ashore with the tide. It had been cut off below the hip joint and just below the knee and was fourteen inches long. The work of cutting was clean and the bones had been sawed through as in the case of the bones of the dismembered body of the woman now at Volk’s morgue, Hoboken, which were found at Shadyside and Weehawken.

The section thrown up by the sea was taken to Coroner W. C. Fay’s morgue at Red Bank after the New York police had been notified of the find.

In order to determine beyond doubt if it belongs to the torso of the murder victim it will be sent to Hoboken and there fitted to the sawed off femur.

Keansburg officials who examined the find were of the opinion that it was part of the leg of a well developed woman of 19 or 20. The leg was in a good state of preservation, although it had apparently been in the water several days. Dr. Edwin Fields, head surgeon of the Monmouth Memorial Hospital, made an examination of the find at the Red Bank morgue last night. He said that there was a clean amputation of the leg with a saw in the upper third of the trochanter and another amputation through the leg just below the articulation of the knee joint. The part measures 14 inches in length and is seven inches wide at the thigh and five inches wide at the lower end.

Assistant County Physician Arthur P. Hasking of Hudson county telephoned to Coroner Fay last night the measurement of the torso stumps of the murdered woman. Fay said they corresponded with the measurements of the part of the leg in his possession. Dr. Hasking said in Jersey City last night that he is satisfied it belongs to the dismembered woman.

“I will go to Keansburg the first thing in the morning with my measurements.” said Dr. Hasking. “If they agree with the measurements of that part of the leg found there, the find will be brought to Hoboken.”

The detectives on the case hope that the work of identification of the murder victim will be simplified by finding the missing head. At present that are pinning a faint hope of an identification on the peculiar birthmark on the woman’s shoulder.

In the case of the missing head, they are fearful that if it was cast into the water it will never reappear. Undertakers tell them that a sufficient amount of gas cannot form to cause it to rise.

North Bergen furnished yesterday what seems to be a clueless clue to the river mystery in a woman’s bloodstained chemise found near the Jersey shore in Bergen county about a mile and a half above the spot where the first part of the woman’s body was picked up. Chief of Police Marcy got a tip that a woman living near the riverfront had picked up the chemise on the night the upper torso was found and he sent Roundsman Emil Piel to investigate.

He learned that the woman in cleaning up her grounds tossed the chemise on a pile of rubbish and touched a match to it. The garment was of ordinary material and had no laundry or other marks upon it that might lead to the identification of its wearer. The chemise was stained with what looked like blood around the neck, in the center and along the lower edges.

Poor old Peter Sterneman, the millinery agent, who insisted in a series of troubled letters to the authorities that he was sure the murdered woman was his daughter, Ella Sterneman, whom, he said, he hadn’t seen in four years, was surrendered to the District Attorney’s office yesterday. Assistant District Attorney Deacon Murphy had a long and interesting talk with the old man after Sterneman’s enterprising “captors” of the day before, who spirited him away for publication purposes, got through with him.

Sterneman was taken to Volk’s morgue in Hoboken in the afternoon by Detective Clinton Wood. As soon as he was shown some of he dead woman’s hair, he said:

Then they exposed the birthmark on the dead woman’s right shoulder and the distressed old man shook his head and murmured:

“No, I don’t know about that. I’ll have to advertise in a Swiss paper for Mrs. Heimer. She can tell about the birthmark.”

At this point Detective Wood and Detective Thomas McDonald of Prosecutor Hudspeth’s office in Hudson county told Sterneman that District Attorney Whitman’s office had been assured beyond a doubt that his daughter Ella was alive and well. She is employed as a domestic at Hazleton, L. I.

The old man, however, wasn’t satisfied and when he came out of the morgue he solemnly said to the newspaper men:

“I think, gentlemen, she is my daughter, but I’m not sure.” He added that if he could find Mrs. Heimer, who once lived at 25 Hague street, Jersey City, by advertising he was sure she could tell. Then he entered into a rambling story of his family difficulties and Detective Wood led him away.

Sterneman was taken back to New York where he was placed in charge of Sergt. Willense for arraignment in the night court.

Magistrate Corrigan committed him to the psychopathic ward at Bellevue Hospital for ten days for observation. In a trip around the city before going to court Sterneman pointed out several houses to Willense in which he said “lived men who had killed his daughter.” He convinced the Magistrate that he was mentally deranged by asking in chambers for a permit to carry a pistol to protect himself against those enemies.

Among those who called at Volk’s morgue yesterday with suspicions that they body there was that of a relative were Margaret Hayes of Brooklyn, who was looking for her sister, Mrs. Mary Flannigan, who dropped out of sight in November last. Miss Hayes was dressed in black and accompanied by her brother. She said that her sister had a scar on her shoulder where she had struck against a curtain, but after looking at the mark on the dead woman she told Prosecutor’s Detective McDonald that she was satisfied that the body was not that of her sister.

The lack of new clues on which to work made desultory the investigation of the police yesterday in the neighborhood of Eighth avenue and 146th street, where the murder is believed to have been committed. Two detectives from Inspector Faurot’s office made further attempts to find the purchaser of the pillow found with the upper torso of the murder victim and bought in the second hand store of George Sachs, 2762 Eighth avenue.

The clue of the moth tar paper, which was bought by a man in the drug store opposite Sachs’s store and in which was wrapped the parts of the woman’s body, also was followed up, but without success. The vague description of the man furnished by H. S. Hurwitz, the druggist, prevented the police from making headway. A house to house canvass failed to discover any woman missing who answered the description of the slain woman.

So far of all those women reported missing and who might be the murder victim the police are most inclined to believe the wife of a man in Richmond, Ind., may prove to be the murdered woman. Samuel Altman, a tailor of that town, was written to the police that the marks on the body found in the river tally with those which might be found on his missing wife, who ran away from him on August 26, bound for New York.

“The mark shaped live a triangle on the shoulderblade of the body might be an ‘L’ which was tattooed on my wife when she was young.” Mr. Altman writes.

“Her maiden name was Lillian Carpenter. She also had the initials ‘L. C.’ tattooed in tiny letters on one hand and the initials ‘T. P.’ above the elbow on one arm.

“Much of our bed linen, which she took with her, is embroidered with an ‘A’ similar to that found on the pillow-case in which one section of the body was found.”