Murderers of Girl May Have Used Auto 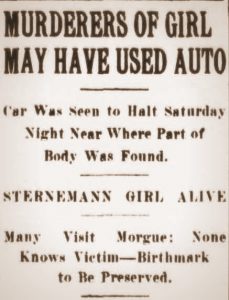 Murderers of Girl May Have Used Auto

Many Visit Morgue: None Knows Victim – Birthmark to be Preserved.

The mystery of the woman whose dismembered body was found in tar paper packages on the Jersey shore off North Bergen and Weehawken is admitted by the police of this city and the towns across the river to be as puzzling as ever. One clue after another went astray yesterday and theory after theory exploded.

Early in the day the police announced that Peter Sterneman, the writer of the incoherent letters to Chief Hays of Hoboken and Morgue Keeper A. J. Volk, had disappeared from his home at 133 Globe avenue, Jamaica. This caused much excitement, for they were anxious to question him concerning his missing daughter, Ella. The police heard that he had been kidnapped by a party of three men, one of whom wore a badge, and they didn’t like it. But they later eliminated the theory that Ella Sterneman was the murdered girl when they satisfied themselves that she is still alive. They would not state the evidence on which they base this belief.

The most promising clue of the day came from Weehawken, where Capt. Messner [sic] and Detective Sergeant Lyons learned that an automobile ran up on Saturday night to the Delaware and Hudson Railroad pier not far from the old ships’ graveyard in which the second part of the body was picked up on Sunday morning.

It was seen by a pier watchman, but the night was so dark he could not get a view of the people who were in it. The automobile arrived at 9:30 o’clock. It stopped alongside the pier for a few minutes and then slipped away as mysteriously as it came.

It is thought that this car may have been one that was seen fifteen minutes later by Mrs. Ella Sternecke, with of a druggist at Willow avenue and Nineteenth street. It came from the direction of Weehawken and was going toward Hoboken, It was going at great speed, but was stopped by a passing train at the Willow avenue crossing. Mrs. Sternecke was positive that there were two men in the car. Another followed close behind, also containing two men.

After hearing that an automobile had been seen near the lonely waterfront off the line of travel, Detective Lyons made tests in the river graveyard to determine whether is was possible for a package to be swept in on the tide from the New York shore.

He tossed several packages and sticks into the water and watched them drift. There are a great many old hulks of vessels in the graveyard. The things that Lyons threw into the water drifted against their sides, but could not reach the spot where the torso was found.

This test, according to Capt. Hessner last night, convinced him more that ever that the part of the body found there was dropped into the Hudson from the Weehawken shore.

“There is no doubt in my mind,” he said, “that the mysterious automobile had no good business near the Delaware and Hudson dock on Sunday night. I think the men in the machine know how the bundle got in the water.”

County Physician Charles W. King of Hudson county said yesterday afternoon that his part in the preliminary investigation had been completed, except that some time to-day he of his assistant will take measures to remove and preserve that portion of the woman’s skin bearing her birthmark. This gruesome exhibit will be placed in formaldehyde and will then be attached to a card. It will be kept in the hope that sooner or later it may aid in the identification of the young woman.

Dr. King has instructed Coroner William Schlemm of West Hoboken to hold an inquest in the case. No date has been set. The coroner is waiting for the police to find witnesses who can testify to things worth knowing before he empanels a jury and goes ahead.

Several anxious persons called at Anthony J. Volk’s morgue, 633 Washington street, Hoboken, yesterday and asked to see the parts of the dismembered body. Some had relatives who had been missing, but they were soon satisfied from the description of what remains of the victim of the river mystery that they would have to look further. Others were actuated by motives of curiosity and were sent away.

The most pathetic called of the day was a poorly dresses woman of 75, describing herself as Mrs. Connors, of 232 West Sixteenth street, who said she was looking for her daughter, Mrs. Margaret Gale, She told Jacob Wintermute, manager of the undertaking office, that her daughter disappeared on June 4 last.

“My grandson read in the paper about this poor girl,” she said “and told me to come over and see if it isn’t my Margaret. My daughter had a mole on her shoulder. I should like to see if the dead woman had one.”

She pleaded to be taken into the morgue, saying she would be as brave as she could. Mr. Wintermute assured her that the dead woman had no moles, but a peculiarly shaped birthmark, and she tottered into the street, weeping as she went.

Acting on the belief that the murder was committed in the neighborhood of Eighth avenue and 145th street, Detective Charlock of Prosecutor Hudspeth’s staff and several detectives under Assistant District Attorney Deacon Murphy scoured that part of the city yesterday in an attempt to find further evidence.

Drug stores, laundries and express offices were visited and a few new facts were discovered. At a laundry on the corner of 146th street and Seventh avenue it was learned that a man whose identity is kept secret brought in a shirt much soiled with blood. At another laundry the manager recalled many bloody handkerchiefs which were brought in recently, but did not remember the person who brought them in.

S. H. Hurwitz, a druggist at 147th street and Eighth avenue, said a man came in about Monday or Tuesday of last week and asked for two sheets of moth tar paper of the kind found wrapped around the fragments of the woman’s body. The man, according to the druggist, did not wear a collar or coat and seemed excited. After getting the paper the man rushed out with it not waiting to have it wrapped up.

This information is considered important, as it was across the street in the second hand store of George Sachs that the pillow found with the body was bought.

H. S. Relin, druggist at 2616 Seventh avenue, told a reporter he had sold one sheet of tar paper to a young woman last Monday or Tuesday. She seemed excited and left hurriedly.

She is described by Mr. Relin as about 25 years old, light hair, 5 feet 6 inches tall and dressed in a brown skirt and a white shirtwaist. She did not wear a hat.

No expressmen in the neighborhood recall having moved any trunks within the last week. All the hauling done has been that of furniture, they say.

Trying to Trace the Boat.

Inquiry was made along the riverfront of the Manhattan side in an effort to discover if any men had hired a rowboat or a launch within the last week. Only a few boats were let at boathouses between 155th and 125th streets, the boatmen told a Sun reporter, and in no instance had the person using them carried packages with them.

The detectives visited a number of physicians and midwives in the vicinity of 145th street and Eighth avenue, in the belief that murdered girl, who was about to become a mother, might have been known to some of them. The result of the investigation is kept secret, but is said to have been nil.

The reported finding of a woman’s slip near Kreischerville, Staten Island, by a boy, caused the detectives to hasten to see the lad.

John Reed, 13 years old, of 2799 Eighth avenue, son of John Reed, a contractor, told the police he found the top of a woman’s head while he was rowing. The boy, with his sister, Mary, was spending his vacation at Kreischerville. He had just learned to row and was practicing.

“I was going along nicely,” John told the police, “when my oar struck something. It looked like seaweed at first. I picked it up and saw it was hair, a woman’s hair. It was about a foot long and was black. As soon as I saw what it was I was scared and threw it back into the water.”

The boy had told his sister of his find last Thursday, but had said nothing more about it until yesterday, when he read the newspapers telling about the murder. His father told the police of the West 152d street station.

The detectives think the scalp may have been cut from the missing head of the murdered woman by the propeller of some steamer.

Peter Sternemann, the writer of the queer letters about his daughter, which disturbed the police on both sides of the river and convinced them that is would be worth while to lock him up, moved last Thursday to two rooms in the home of Mrs. Matilda Weiss at 113 Globe avenue, Jamaica.

He made a living peddling millinery and was in the habit of staying out late. Mrs. Weiss says that when he returned to his rooms at 1:30 o’clock yesterday morning he was seized by two men who were waiting for him in the shadow of an adjoining house. One of these men showed a badge and told Sternemann it was his duty to place him under arrest. At least that is the impression that Mrs. Weiss gained from the performance. Sternemann made no protest, Mrs. Weiss said, and like a docile child went away with his captors after they had made a search of his rooms.

The Jamaica police denied that they had anything whatever to do with the “arrest” of Sternemann. They declared they couldn’t understand it at all and denied any knowledge of his whereabouts.

Mrs. Weiss said that two photographs of Ella Sternemann disappeared from the wall of her father;s room. She thinks they were taken by Sternemann’s “captors.” Two or three shirts went with them.