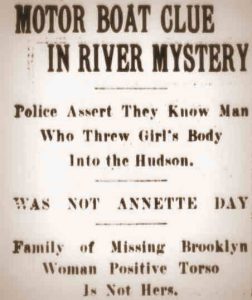 Police Assert They Know Man Who Threw Girl’s Body Into the Hudson.

Was Not Annette Day

Family of Missing Brooklyn Woman Positive Torso Is Not Hers.

A “mysterious” motor boat is being sought by the police in an effort to solve the Hudson River murder after it was established definitely yesterday that the victim was not Miss Annette Day of Brooklyn, whose brother had identified the parts of the torso in the Hoboken morgue as those of his sister. The police admit that virtually nothing has been accomplished toward clearing the mystery since the discovery of the crime.

One after another theories have been exploded. As fast as theories broke down new ones have taken their places. The searchlight of publicity has disclosed many private troubles and laid bare family secrets, but has not shed any light on the murder mystery.

The police decline to say who owns the motor boat, several trips of which they believe may have had some connection with the slaying of the girl. It was from the boat that the police believe the parts of the body were thrown. The boat’s owner is believed to have been responsible for the girl’s death.

The boat went on a trip about the time when the crime is believed to have been committed. It is between twenty-five and forty-five feet long and can accommodate four persons nicely, the police say. The following facts about the craft were learned from Chief Leonard Marcy of North Bergen who spent yesterday in a launch following the trail of the motor boat.

The boat is owned by a man in New York, said to be prominent, whose close associate is a physician. This new “man in the case” is said to have had trouble of various occasions with women. About the end of August, accompanied by his physician friend, he went on a cruise with two women. The boat was absent from its moorings in the Harlem River – the exact place is kept secret by the police. No attempt has been made to arrest the men, as the police admit they have not enough evidence. Where the boat is now is not known to the police but many clues have been discovered.

“It is evident,” Chief Marcy told reporters yesterday, “that the crime was committed in Manhattan. That much is certain. I have a line on these men in the motor boat and expect something to develop before long. We think the motor boat was used to distribute the parts of the victim’s body.”

Detective Michael Lyons of the Weehawken station is still looking for the man who was seen on a car carrying two suit cases from which emanated disagreeable odors. This man, Detective Lyons believes, had in the suit case the parts of the victim’s body.

Inspector Faurot is investigating a story told by Robert Cummings, who works around the docks at Yonkers. According to Cummings he was approached by a stranger Saturday a week ago, who asked him to row him across the Hudson River to New Jersey. The stranger carried a heavy suit case which he guarded carefully, says Cummings.

The man is described as being about 27 years old, weighed nearly 140 pounds, and was five feet eight inches in height. He wore a gray suit and was smooth shaven. The stranger told Cummings he lived at Fourteenth street and Ninth avenue.

Another dock hand, Louis Hecht, also was asked by two strangers to row them across the river. They too, carried suit cases, according to Hecht. Hecht refused and the men left. The strangers were described as having dark complexions and looking like Italians.

Inspector Faurot spent yesterday with the Day family, the members of which denied absolutely that the woman who had been murdered could have been Annette Day, who disappeared August from her sister’s home in Tarrytown. Salvatore and Mary Day, brother and sister of the missing girl, viewed the torso in the Hoboken morgue and were certain it was not part of Annette’s body. The physician who had been accused by Francis D. Day was located in California and said he had not seen the girl for many months.