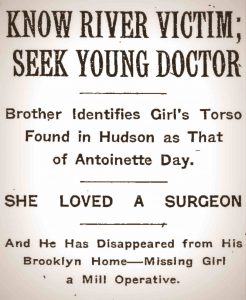 Brother Identifies Girl’s Torso Found in Hudson as That of Antoinette Day.

She Loved a Surgeon

And He Has Disappeared from His Brooklyn Home – Missing Girl a Mill Operative.

Inspector Faurot announced at Police Headquarters last night that the woman, parts of whose dismembered body had been recovered from the Hudson River, had been identified positively as Antoinette Day of 206 Union Street, Brooklyn. The identification was made yesterday afternoon at Volk’s Morgue in Hoboken by her brother, Francis Day, who was employed by a real estate firm at 109 Broad Street, in this city.

The girl disappeared on Aug. 16 while she was on a trip to Tarrytown with her mother, Mrs. Marietta Day. She had been employed as a machine operator in a mill, and her mother believed at the time she disappeared that she had taken a new place.

After two weeks had passed and no word was received from her, the family of the girl became alarmed. When he first read of the young woman whose body had been dismembered, Francis Day feared that it was his sister. He made two trips to Volk’s Morgue and talked with employees there about the body. The answers to some of his questions convinced him at first that the murdered woman was not his sister after all.

Young Day said last night that the circumstance which convinced him finally that the murdered woman was his sister was the discovery that a young surgeon, with whom she had been infatuated, had returned to Brooklyn after several months’ absence.

On this account, Day resolved yesterday to inspect the parts of the body in the Hoboken Morgue. After a glance at the birthmark on the shoulder all his doubts vanished. While he had not recognized the mark absolutely from newspaper photographs, he said there could be no question but that the blemish was one which he had seen on the shoulder of his missing sister. Young Day said that other distinguishing marks which would appear, if the rest of the body was found, were two gold upper teeth and a chocolate colored mark on the left arm near the elbow.

Antoinette Day, her brother said, was 23 years old, and 5 feet 1 inch in height. Her complexion was dark and her skin unusually fine. When she was last seen by the family, he said, she was dressed in a cream-colored dress trimmed with black velvet. She wore a black hat of fine straw. Pinned on her dress was a woman’s gold hunting case watch.

Detective Regan of the Butler Street Station, who was the first to hear the brother’s story, investigated on the theory that she had been murdered by a young surgeon. He said last night that nothing had developed as yet that pointed out any one very definitely as the murderer of the girl.

Inspector Faurot said that the identification of the body was the first real step made toward the detection of the murderer. At midnight he said that the police had nothing except vague suspicion to go by and that much work would have to [be] done before the guilty person could be named.

Antoinette Day’s father has been dead for several years. Her mother is living, and she has two younger sisters, Emma and Mary. Besides Francis, she had one other brother named Salvatore. Mrs. Day is of Italian parentage. Her husband was an Englishman.

The Inspector and Acting Captain Coghlan of the Brooklyn Detective Bureau, after a day’s work which produced promising results, stayed late at Police Headquarters last nigh talking with the boy, and they said there was a chance that the murder would be cleared up in a few hours.

The surgeon, accused by the girl’s brother, is 29 years old, and is a graduate of the Long Island College of Physicians and Surgeons.

According to the boy’s story, his sister had been the object of marked attentions from the young surgeon before he departed for the West. In August the family of the young woman discovered that she was facing motherhood, and, according to the story told to the police, they held the surgeon responsible for this.

The family made no report to the police when the girl departed from home on Aug. 16, fearing that her disgrace might become public. There were not alarmed at first when they read of the discovery of part of the dismembered body of a young woman in the river. When they heard, though, that the surgeon they accused had returned to Brooklyn at about the same time their daughter had disappeared, they became alarmed, and it was then that the story was first told to the police.

The principal reason the police had yesterday afternoon for believing that they were on the right trail was supplied by S. H. Hurwitz, a druggist at Eighth Avenue and 147th Street, who sold two sheets of tar paper in which it was believed the two parts of the torso of the murdered woman were wrapped. The boy and two Headquarters detectives showed him the picture of the class of forty-six members of the Long Island College of Physicians and Surgeons with which the suspected man was graduated.

Hurwitz hesitated at first when he was asked if he saw any one in the group who resembled the purchaser of the tar paper. After a close study of the photograph, he put his finger on the picture of the suspected man. While he said that he thought there was a strong resemblance between the man in the photograph and the disheveled man who ran into his shop and bought the two sheets of paper, he added that he was by no means sure of his identity. Even if he should see the man face to face, Hurwitz said that he was not certain that he could identify him.

George Sachs, proprietor of the furniture store at Eighth Avenue and 147th Street, looked at the picture and said that he could see no one in it who recalled to his mind the purchaser of the pillow which was found in the Hudson River a week ago and which contained the upper part of the torso of the murdered woman.

This pillow, the wire and tar paper which surrounded it, and the pillow slip, wire, and tar paper which were wrapped around the second part of the body were taken away by detectives last night from Volk’s Morgue at Hoboken. It was believed that they were removed to Police Headquarters in this city. It was said last night that the pillow-slip with the initial “A” embroidered on it had been taken to Brooklyn to be shown to the sister of the missing girl. No word on this subject could be obtained last night from Inspector Faurot.

Chief of Police Marcy of North Bergen, N. J., said yesterday that a blood-stained show had been found in a motor boat at Weehawken, N. J. The motor boat had been hired, he said, bu two men shortly before the fragments of the dismembered body were found. Chief Marcy refused to say whether the shoe was a man’s or a woman’s.

Casper Jianen, of 303 West Thirty-third Street, the waiter who on Thursday identified the body in Hoboken as that of his wife, said yesterday that he though he must be mistaken after all. Dispatches from Havana said that Mrs. Lena Jianen had been found living there. Mrs. Jianen arrived in Cuba some two weeks ago.