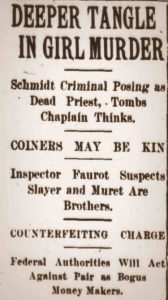 Coiners May Be Kin.

Federal Authorities Will Act Against Pair as Bogus Money Makers.

Hans Schmidt, the former assistant priest of St. Joseph’s Roman Catholic Church, who killed Anna Aumuller, cut up the body and dumped the pieces into the Hudson River, and Ernest Arthur Muret, fraudulent dentist of 301 St. Nicholas avenue, will be formally charged with counterfeiting to-day by the Federal authorities. The arrest of Muret early yesterday morning as Schmidt’s partner in a counterfeiting enterprise was reported in late editions of The Sun yesterday.

John J. Henry, head of the New York district secret service, said last night that warrants would be issued by United States Commissioner Hitchcock this morning on the strength of complaints which have been drawn against both men.

The warrants will be served immediately on Warden Fallon of the Tombs and the strong hand of Uncle Sam will be used against them at the proper time, future actions depending upon what happens in the gruesome case involving Schmidt.

Muret was arraigned yesterday before Magistrate Krotel in the Harlem court on a charge of violating the Sullivan law. A revolver was found among his belongings when he was arrested and the charge was made as the easiest formal way of holding him. The Magistrate committed him in default of $5,000 and Muret was sent to the Tombs, which houses Schmidt.

Four secret service men went yesterday to the flat at 516 West 134th street, which Muret, as “George Miller,” and Schmidt rigged up as a counterfeiting plant, and confiscated everything in sight that had not been seized already by the police in their early morning raid.

Chief Henry declared after the visit of his men that elaborate plans had been made to add to the output of bogus money.

In the complaints subsequently drawn up it was alleged that Muret and Schmidt had been engaged in making counterfeit money and making in part counterfeit money. The latter allegation was based on the discovery in the flat of partly burned “proofs” of unfinished bogus bills bearing an imitation of Uncle Sam’s red seal and “X” marks indicating the denomination of the bills.

Muret and Schmidt bear a striking resemblance to each other, a fact which has led the police to believe that they may be related, although each man solemnly avers that different blood runs in their veins.

Inspector Faurot was very much impressed with the peculiar likeness, and believe it to be much more than the coincidence that Muret tried to make him believe. The inspector went so far as to express the opinion that the strange pair might be brothers.

Schmidt, however, wouldn’t have it that way. He repeatedly told Father Evers, the Tombs chaplain, that the dentist wasn’t a brother, of whom, he said, he had two in the village of Schweinheim auf Schaumberg, where live his father and mother, Mr. and Mrs. Heinrich Schmidt.

Muret, according to Father Evers, looks upon Schmidt in the light of a “consumate scoundrel,” and called him such, while Schmidt expresses great sorrow that his friend Muret finds himself involved in trouble.

“It is only a personal opinion of mine,” said Father Evers to a Sun reporter yesterday, “but I have no idea that this man who says he is Schmidt isn’t Schmidt at all but an impostor. He had many fake papers and fake seals. That we know. It has happened in some countries that after a priest died his credentials were stolen and others, in some cases students dismissed from seminaries, have masqueraded under them. I want to solve this mystery if I can, and this afternoon I will send two or three photographs of Schmidt to his parents in Schweinheim with a request that they send me word if they are the pictures of their son, the priest.”

Father Evers took to the Tombs yesterday afternoon a German priest who talks with the tongue of the southern Fatherland, with which Schmidt is familiar. The chaplain declined to make public what was said in the cell, although he admitted that Schmidt was apparently acquainted with certain names and places referred to by the German visitor.

In an earlier talk with the self-confessed murderer yesterday Schmidt ceased placing the responsibility for his actions upon St. Elizabeth of Hungary and Abraham and repeatedly assured Father Evers that the voice of God had directed him.

“Did the dentist help you cut up the body of Anna Aumuller?” asked the chaplain.

“No,” replied Schmidt. “I acted alone as a priest at the sacrifice. Muret had nothing to do with it.”

“Where did you get your counterfeiting outfit?” asked Father Evers.

Then the chaplain asked: “What were you going to do with all the money that you made?”

“The condition of the poor is had,” responded Schmidt. “It’s the few who have all the money. I was going to give half the money I made to the poor in this country and half to the poor of Germany.”

“When you left Germany,” continued Father Evers, “all your priestly function had been withdrawn. Pray tell me how did you get your letters to the Bishop?”

“God above gave them to me.” was the reply. “God is greater that all the Bishops.”

During the interview Schmidt lay on his back in his cell with his eyes straight ahead. He was stolid and apparently unconcerned.”

“To my mind,” said the chaplain, “he is a man of two faces; the right is the face of a large man; the left is that of a small man. The right eye is up and the left eye is down.”

Schmidt’s counsel, Alphonse G. Koelble, had a talk with the prisoner in the afternoon and came from the interview more convinced that ever that Schmidt is insane.

“He told me,” said Koelble, “that he is a trinity. First, he is the ‘Dr. Emil Moliere’ whose cards were found in such great numbers. Second, he is the priest, and third, he is the money maker.

“Schmidt told me,” continued Koelble, “that Muret had ‘nothing to do with the sacrifice of Anna.’ ‘I did it all by myself.’ he said.”

As for the cards of “Dr. Moliere, formerly assistant surgeon to the Municipal Woman’s Hospital, Paris, France,” found in such great numbers among Schmidt’s effects, the lawyer said that Schmidt replied: “That was another inspiration of God.”

“He said.” continued Koelble, “that another cause of the great social distress in the world is too many children. So as Dr. Moliere he said he made a medicine to prevent children from being born. He declared he didn’t make the medicine to sell and insisted that it was perfectly harmless. Asked if it proved successful, he told me that it didn’t help Anna Aumuller. He denied that he is insane and refused to talk about the report that he had uncles who were crazy.”

Among the things found in the property of Muret yesterday was a postal card bearing the picture of Napoleon and the printed inscription “Impossible is a word found only in the dictionary.” It was signed “Hans” and bore this written message: “Let us hope that our children will have rich parents.”

The police believe that Schmidt had their counterfeiting plans in his mind when he sent the postal to the dentist.

In their investigations yesterday of the dentist and his career the police found that among the persons to whom Muret had telephoned during the latter part of July was Dr. Alfred Michaelis of 5 West Ninety-first street.

Inquiry at the physician’s office elicited the fact that Muret was treated by Dr. Michaelis. The physician’s wife said that he spoke with the accent of a man who had lived in Germany and that he had neglected to pay his bill.

Neighbors in the vicinity of Muret’s dental office at 301 St. Nicholas avenue said yesterday that after the dentist took up his residence there and started practicing they noticed that he was in the habit of keeping late hours. There were folks also who told stories of a woman who called on him so frequently that her face became very familiar.

Once, it was said, a violent scream was heard in the dental office and a woman ran into the street. Off course no one knew that the screamer wasn’t a woman who couldn’t stand the pain of having a tooth pulled and fled into the night.

Bertha Zech, Muret’s maid, who was taken by the police at a material witness, was discharged from custody yesterday. It is understood that she has made a full and free explanation of all that has taken place in the house. Miss Zech slept in the kitchen.

The fact has been established that Muret telephoned St. Joseph’s rectory on August 1 last and the assumption is that he communicated with Schmidt there. He also talked over the telephone on August 11 with the District Attorney’s office, but what his business was could not be learned there yesterday. Assistant District Attorney Deacon Murphy is looking that up.

Mr. Murphy had a conference yesterday afternoon at Police Headquarters with Inspector Faurot, who was at that time the most tired and perhaps the happiest man in New York as the result of the clean sweep made by the men under his direction in solving the mystery of the Hudson River murder.

Inspector Faurot announced that the seven inch length of bone found in the debris of a bonfire in which a man burned a bundle on the afternoon of September 5 on a lot in 152d street, between Seventh avenue and Macomb’s place, had turned out to be the bone of an animal. The ends of the bone had been sawed off, just as were the legs and arm bone of the river victim, but Dr. Palmer, the police surgeon, who examined it, said he was very sure it was not the bone of a human being.

Messmer, the wife slayer in the Tombs, who had been Schmidt’s cellmate, went on strike yesterday morning. He said he had asked the priest why he killed his wife and Schmidt replied: “For love, and I love you too” Messmer, alarmed, sent a hurried message to the warden asking to be transferred. The frightened murderer was moved to another cell.