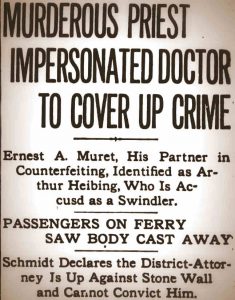 Ernest A. Muret, His Partner in Counterfeiting, Identified as Arthur Heibing, Who Is Accused as a Swindler.

Schmidt Declares the District-Attorney Is Up Against Stone Wall and Cannot Convict Him.

A search of the records of the Health Department is under way to determine if Hans Schmidt, the murderer of Anna Aumueller, succeeded in putting though any of the death certificates he admits he intended to use in a series of murders. Although Schmidt says he planned to kill only cripples and incurables, the police are inclined to believe, from the evidence at hand, that his real object was to seek out wealthy aged invalids, gain their confidence as a priest, get them to surrender their property and then put them out of the way.

Inspector Faurot is on the eve of rounding up important evidence uncovered by Chief of Police Titus of Englewood, N. J. It is understood that Titus has found witnesses who will swear they saw Schmidt throw a part of Anna Aumueller’s body from a Fort Lee ferryboat into the North River. Conductors and motormen of the Eighth avenue line and the One Hundred and Twenty-fifth street crosstown line have been questioned and it is believed some of them will be able to identify Schmidt as the man they saw carrying large bundles between the Bradhurst avenue murder flat and the Fort Lee ferryhouse at the foot of West One Hundred and Thirtieth street.

A cable dispatch from Hamburg, Germany, states that Dr. Ernest Muret, Schmidt’s chum and partner in the counterfeiting enterprise, is really Arthur Heibing, who was born in Makel in 1897 and spent several years in Hamburg, during which time he was in continual trouble with the police. He left Germany in 1909 at about the same time Schmidt came to the United States. There are warrants out charging fraud against Muret in Hamburg and Berlin, according to the cable dispatch.

Greatly to the surprise of the prison authorities, Schmidt took on an entirely new attitude to-day. Heretofore he has frankly admitted the murder of Anna Aumueller and expressed his willingness to confess to other murders is such confessions would do anybody any good. To-day Schmidt was cautious and defiant. He said:

The District-Attorney is up against a stone wall in my case. My lawyer tells me I can’t be convicted.

Schmidt’s explanation of why he had blank death certificates came late yesterday in a talk with his lawyer and Detectives McKenna and Cassassa of Inspector Faurot’s staff. He denied that he had killed any one except Anna, his sweetheart, but said he had a number of other victims in mind when he bought the knife and saw with which her body was dismembered.

In the book of certificates found among Schmidt’s effects is a stub that the detectives have been unable to account for. The Health Department records may throw some light on it.

Aimed to “Benefit” Those He Killed.

The discredited priest, slayer of his girl dupe and counterfeiter, pretended that in taking the lives of his fellow being he intended only to benefit them. Most of his chosen victims, he said, are parishioners of St. Joseph’s Church, but he refused to give the names of any of them.

“I meant to benefit those I killed,” he declared. “I intended to end their lives painlessly. Those I intended to kill would be better off in the other world.”

When asked how he intended to kill them he said”

“Oh, any way, so long as it was an easy death. Probably with a knife. I might have used a poison that acted quickly.”

He admitted he first intended to conceal the Aumueller murder by the use of a bogus death certificate. The girl had just been dismissed from the rectory where she had been employed and none of her acquaintances, who were few, knew where she had gone. It was probably as good a time as Schmidt could have desired for making away with her. After he had cast the dismembered body into the river, he intended to file the forged papers that would have officially recorded her as dead.

He said he had had several persons in mind for his second murder victim, but had not decided on the next when the finding of Anna Aumueller’s body put an end temporarily to the work.

The depravity of his nature was further revealed when he admitted that it had been his purpose to cut up and dispose of contemplated victims, as he did his sweetheart, using forged permits to officially register their death and burial.

In explaining the photographs of the death certificate of Robert Smith of No. 345 West One Hundred and Twenty-third street, to whom he administered the last rites, Schmidt said he had two purposes. One was that he thought he would have to make counterfeits, not knowing how to get genuine certificate blanks; the other was to get a copy of the signature of Dr. J. J. Slevin of No. 61 East One Hundred and Twenty-sixth street, who signed the certificate.

Schmidt told the detectives that Dr. Slevin, in addition to his medical practice, conducts an undertaking establishment. This statement does a wrong to Dr. Slevin, who is one of the best known practitioners in Harlem. Dr. Slevin is not and never has been interested in any undertaking business. His business is to heal the sick and minister to the injured. Schmidt seized upon Dr. Slevin’s name simply because Dr. Slevin’s name happened to be signed to the only certificate Schmidt could get hold of. Dr. Slevin did not know Schmidt.

The reason he had never made plates for counterfeiting the certificate was that the form was changed by the Health Department about that time. He met this unexpected contingency by stealing a book of blank certificates. The police will not divulge the name of the doctor from whom he stole it. He told the detectives that he picked up the Smith certificate from a table while he was paying a visit of condolence to the house, and carried it away long enough to have it photographed.

There are two blanks gone from the book of stolen certificates. One has been accounted for, but the other is still a subject of police investigation, and an examination of the mortality records may disclose another Schmidt murder.

Though none of the prominent Catholic clergymen was inclined to accept seriously the suggestion that the prisoners in the Tombs is not Hans Schmidt, cable messages yesterday from the priest’s birthplace in Germany were taken as indisputable evidence that the former priest of the Diocese of Mainz and the late assistant at St. Joseph’s are the same person.

“It is useless” remarked Father Huntman, rector of St. Joseph’s, “to suggest that; besides, it has stirred up more trouble for the priests of this parish.”

At least ten times yesterday the aged rector of St. Joseph’s informed visitors there could be no question of the validity of marriages performed by Schmidt. He declined to discuss any other questions regarding his late assistant, making it clear that was the wish of his superiors.