Aged Eccentric is Spirited Off From the Police 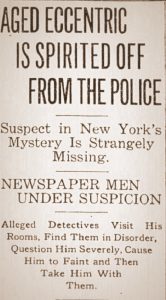 Aged Eccentric is Spirited Off From the Police

Alleged Detectives Visit His Rooms, Find Them in Disorder, Question Him Severely, Cause Him to Faint and Then Take Him With Them.

New York, September 9 – Although several new and promising clues developed during the day, the police of this city Hoboken, Weehawken and North Bergen to-night admitted that the identity of the young woman whose dismembered body was found in the Hudson River last Friday was still a mystery. The developments of the day were:

Peter H. Sternemann, the eccentric letter writer who had become a central figure in the mystery through his claim that the murdered woman was his missing daughter Ella, was spirited away from his home at 113 Globe Avenue, Jamaica, early to-day by three men representing themselves as detectives. The police and the district attorney’s office disclaim all knowledge of an arrest, and hint that Sternemann has been hidden away by men in the employ of a newspaper.

One important clue was the discovery that a disheveled and greatly excited young man had purchased in the store of S. H. Hurwitz, on Eighth Avenue, near 147th Street, a quantity of tar paper of the same quality as that in which the dismembered fragments of the body were wrapped. This purchase was made early last week.

The fact that it was a store in this neighborhood that disposed of the two pillow slips of the same design and quality as that in which the fragments of the body were wrapped leads the police to believe that the murder was committed in this locality,

Letters and telephone messages telling of missing girls have flowed in upon the police to-day from all quarters.

May be Hoboken Girl.

Still another clue was the information given the police by a Cliffside, N. J., woman, who believes that the murder victim was a young woman named Lulu Thomas, who eloped from Spring Valley to New York last June. She lived in Hoboken until two weeks ago, when she dropped out of sight.

The woman said she knew this girl personally, and that she had a birthmark on her shoulder, corresponding with the mark on the shoulder of the slain girl.

Sternemann’s disappearance was the most startling of the day’s developments. Another long rambling letter signed by the man was received by Assistant District Attorney Murphy this morning. Many names and dates were mentioned, but in such obscure connection that it was impossible to interpret his meaning.

In the two rooms occupied by Sternemann, in Jamaica, the police to-day found a jumbled mass of furniture, crates of feathers, artificial flowers, numerous Bibles and a freshly-painted kitchen table. They found that the men who spirited Sternemann away shortly after midnight this morning had questioned him in the presence of his woman before placing him under arrest. One question was: “What sis you do with the head of the murdered woman?” Sternemann turned pale at this, and gasped:
“You don’t think I murdered my own daughter, do you?”

Sternemann finally fainted under the rapid fire of questions. The “detectives” then asked the landlady about some newly washed clothing in the rooms and about the freshly painted table.. She said Sternemann had done all this work himself.

“Tell them that you found my clothing was dirty and ordered me to wash it.” he suddenly exclaimed, having recovered from his faint.

“I guess you had better come with us.” said the alleged detectives, and, taking him by the arms, they disappeared into the night.

During the day the police searched for Sternemann without finding a clue. Examination of his effects led to the discovery of many writings indicating a disordered mind.

The man is described as well past middle age, very careless in his attire and exceedingly quarrelsome. One of his daughters is confined in the King’s Park Insane Asylum. The disappearance of the other daughter, Ella, appears to have preyed upon his mind. One of the detectives working on the case to-day said Sternemann had been in the habit of claiming bodies of unidentified women as that of his daughter.

Mrs. Amelia Schafer, a costumer, at 225 Third Avenue, says she took Ella Sternemann to live with her and work in her shop five years ago, but that the girl, who seemed to be in fear of her father, disappeared after living with her about eighteen months.

Dr. William Moseley of Third Avenue and Eighty-ninth Street, who was mentioned in Sternemann’s first letter, says he rented rooms to Sternemann and his daughter Ella three years ago, but had to notify Sternemann to vacate shortly afterward because of his eccentricities.

Mrs. Ella Sternemann, of Mount Vernon, declared to-day that she believed the body found in the Hudson will prove to be that of her half niece Ella, because of the L shaped scar on the shoulder. The girl, she said, had just such a scar. It was caused by a red hot poker [with] which her father, Peter Sternemann, struck the girl some years ago.

“Peter is my husband’s half-brother,” said Mrs. Sternemann. “We are all afraid of him. We believe him insane. His first wife died very mysteriously years ago, when his two daughters, Ella and Emily, were little tots. Then he married again. Ella and Emily were mortally afraid of their father, and would come running to us for protection after he had beaten them. Emily finally went insane from his brutality. Ella disappeared three years ago. Peter’s second wife left him in 1907, after he tried to kill her with a sword. He was arrested, but managed to beat the case. Then they separated. The wife is now living somewhere in New Jersey.”

Aged Eccentric is Spirited Off From the Police, The Times Dispatch, 10 September 1913, page 1, column 4, and page 9, column two