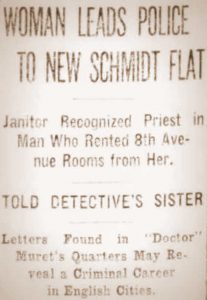 Janitor Recognized Priest in Man Who Rented 8th Avenue Rooms from Her.

The visit by the police to the flat on the fourth floor of No. 2362 Eighth avenue was made as the result of a conversation Miss Frances Blewet, a sister of Detective George Blewet, of acting Captain “Dan” Costigan’s staff, had with Mrs. Dowd, the janitor of the house.

When Blewet returned home Tuesday night his sister told him Mrs. Dowd said the man who came there September 3 to rent a vacant apartment and gave his names as Jacob Schneider was Father Schmidt. Blewet reported these facts yesterday to Inspector Faurot, who ordered him and his partner, Joseph Brawley, to go to the house and force an entrance. This was done after Mrs. Dowd identified police pictures of the priest. The four rooms were bare of furniture.

Mrs. Dowd said that while the man she recognized as Father Schmidt was looking at the rooms she noticed he was more particular about the locks and fastenings on the doors and windows than anything else. The day following his first visit he came with a large suitcase and a smaller one of straw.

May Be Photograph of Schmidt.

The police visited the flat in the afternoon and after waiting for a time in the hope some one might come to the place, though no one had been there since September 4, they broke in. The only things found were the two cases.

The larger suitcase contained several pieces of embroidery work, a baby’s under garment and some cloth. A photograph in a gold frame of a man sitting in a chair was also found. The man had a full beard, and the picture is believed by Inspector Faurot to be a likeness of Father Schmidt. A pair of trousers and waistcoat of the same design and make as that of the outer jacket discovered in the flat at No. 68 Bradhurst avenue also was discovered.

A student’s reader in English and German was among the effects in the suitcase, as well as a ladies’ guimpe, two pairs of stockings and a pair of long white gloves. In the smaller case were found toilet articles. All these are believed to have been the property of the slain girl.

It is the theory of the police that Schmidt had intended to remove the two trunks in which were found all of the personal effects of Anna Aumuller from the Bradhurst flat.

That Schmidt feared the police would soon be on his trail, since he knew from the newspapers they were tracing the sales slips from the Sachs store, is the opinion of the detectives. This is also evident from the act that he did not go to the Bradhurst avenue flat within five days previous to his arrest. It had been “covered” by the police for this space of time for the purpose of arresting the first person to enter it.

Schmidt’s fear that he would ultimately be found out and the fact that he was losing courage have been since learned from other priests of St. Joseph’s Parish House, who also have recalled since his arrest that he freely discussed the murder of the girl, mentioning “how horrifying it was to read of it.”

One of the many theories which have been advanced by the police as to his motive for killing the girl is that he feared exposure of his wrongdoings from the girl herself. That he had been threatened by the girl was told to Inspector Faurot by a Harlem physician. In the physician’s presence the girl told the priest she would stab him if he betrayed her.

Letters Tell of Muret’s Past.

Letters and other personal efects found int he apartment of “Doctor” Muret have partially brought to light some of his past life. In the letters found signed by “Vera Harris,” No. 12 1st street, and dated Walton Brompton, Chelsea, London, such terms as “dear Lulu,” and “My Ducky” (referring to Muret), and “Your loving wifey Vera” appear. Their contents may reveal a criminal career in English cities of “Doctor” Ernest A. Muret, who was known under various names there.

The Scotland yard detectives have been notified of the arrest of Muret here and have been requested to cable all information they might have or are able to get to the New York police.

The Muret letters frequently refer to “a medal and certificate taken by the police is grieving mamma and me.” Frequent visits of the detectives to their house also are mentioned. A quotation from one letter reads: “A detective came to our house and inquired for you. Soon afterward three others came and they searched the house from top to bottom. Mamma gave them a description of you, but it did not at all tally with yours. One of the detectives told me that he did not believe me when I told him you left for France. He said you would have only been fined five pounds.” This letter also mentions that “mamma is glad to get out of Gloucester.”

In addition to the letters signed “Vera” there was a bundle of letters which Inspector Faurot will read to-day. The envelopes of all were addressed from various parts of Europe in different handwriting to Dr. A. Ernst and Dr. E. Muret, and show he had been visiting in and around London in 1911. A membership card in the Young Men’s Christian Union of Hamburg in the name of Arthur Heibing is in Faurot’s hands. Heibing is believed by the inspector to be the fraudulent dentist.

Detectives Mulligan and Healy, of the West 68th street police station, who previous to joining the Police Department were safe experts, succeeded after several hours’ work in opening a safe two by four feet in Muret’s flat, at No. 301 St. Nicholas avenue, late yesterday afternoon.

A safe deposit receipt for a vault for one year in the Mount Morris Bank, 125th street and Park avenue, dated February 13, 1913, was found. This will be searched by the police to-day. Real estate pamphlets of the Casualty Realty Company also were found, as well as correspondence concerning the sale of 636 acres of land in New Jersey.

In the name of Dr. Arnold Held, Muret got a diploma from the American Mechano-Therapy College of Chicago on May 14, 1909. it is signed by “W. C. Schultze, M.D., President; F. S. Tinthoff, secretary; K. H. Schmidt, D.M.T.; E. H. Bromund, M.D.; S. J. Tinthoff, treasurer.” Appended to the diploma is a document which bears a picture of Muret under the name of Dr. Arnold Held. It is signed by Paul Valy, notary public of Cook County, and dated July 1, 1909. It reads: “I, the undersigned, do herewith certify that the above likeness of Dr. Arnold Held, personally known to me to be the same person known to be living at No. 478 North Clark street, Chicago, and practicing medicine.”

Aschaffenburg, Germany. Sept. 17 – Regarding the reports from New York that Hans Schmidt, the self-confessed murderer, and the dentist, Ernest A. Muret, an alleged counterfeiting accomplice, may possibly be brothers, Schmidt’s father said to-day he had no other son in America.

He talked freely of his son’s career, and said he was known during his Mainz seminary days as “the mad doctor.” He began to show signs of insanity seven years ago and repeatedly made statements from the pulpit which caused his hearers to laugh loudly.”

The authorities here are inclined to believe that Schmidt may have been responsible for the murder of a telephone girl names Haas, whose body was found near his parent’s home a few years ago, while he was living there.

Berlin, Sept. 17. – A search through the lists of students at the Berlin Dental College since 1899 shows they contain no such name as Ernest Arthur Muret, who asserts he was a student there.