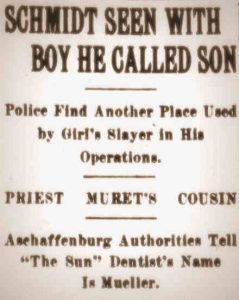 A cable dispatch to The Sun from Aschaffenburg, Germany, last night says that investigation there indicates that Ernest A. Muret, under arrest as a counterfeiter and an accomplice of Hans Schmidt, slayer of Anna Aumuller, is Adolph Mueller of Mayence and a cousin of Schmidt.

According to the Aschaffenburg authorities the men occupied themselves a great deal in Germany several years ago with hypnotism and spiritualistic seances. They had a quarrel and were bitter enemies for a time, but were reconciled before Father Schmidt left for America.

This word from Germany offsets Schmidt’s statement yesterday that he had known Muret only ten months. The slayer of Anna Aumuller says he quarreled with Muret last month. Muret in a note from his cell in the Tombs said last night:

“Schmidt and I quarreled in August, when we practically parted. Schmidt began then already to show signs that St. Elizabeth was with him and he wanted to become a second Jesus. I called him crazy and he got sore at me.”

A cable dispatch to The Sun from London says that Dr. Muret is a fugitive from English justice. He went under various names there. He was summoned to Bow street police court in 1911 for misrepresenting himself as a qualified physician, calling himself Stein, but fled to France without answering the summons.

While Muret was in London he taught languages, sometimes as an employee of a teaching bureau and at others acting for himself. He used the name of Ernst.

Vera Harris, who wrote letters to Muret in New York, and her mother, who have been living in Chelsea for two years, have gone to Dover, saying there were going for a fortnight’s vacation. They left some clothes and an address at Dover which the police there say does not exist. The landlord of the Chelsea lodgings says Vera is 17 years old. She never had a sweetheart as far as he knew and neither her nor her mother ever received any letters from America.

Muret has been traced to various addresses in London. The latest was at 19 Westmoreland place, whose landlady professes to have seen him in London within six months. On the other hand, the officials of the medical associations who tried to prosecute him in Bow street police court believe he has never been in British territory since that time.

Said He Was Schmidt’s Son.

The police discovered yesterday a fourth place which Schmidt used in his crime operations. It was at 124 West Eighty-fourth street. Mrs. Manzer, who rented a room there to Schmidt, was worrying last night because she had forgotten to tell Inspector Faurot that when Schmidt went to this room he sometimes brought with him a five-year-old boy.

Mrs. Manzer said last night that Schmidt had a five-year-old boy with him, who he said was his son. She asked the lad his name and he replied: “August Van Dyke.”

Van Dyke was the name under which Schmidt rented the room, and it was the same alias he used at 68 Bradhurst avenue, where he killed Anna Aumuller, and at 2562 Eighth avenue, where he took baby clothing made by his victim.

“It was in January that he rented the room,” said Mrs. Manzer. “I think it was from January 4 to January 18. One day he brought a boy with him. The boy looked like Schmidt, in fact there was a striking resemblance. I remarked what a healthy looking little fellow he was and his father said the boy lived in New Jersey. I don’t remember if he mentioned any particular town. The boy was very nice looking, a little shy and spoke very low, and he was apparently well cared for. He was well dressed.

“He never slept in his room at all and never came at night. It was the smallest room I had, with no wardrobe, but just a shiffonier [sic] and a bed. He said: ‘That will do, because I’m not in much.’ He paid $3 a week for the room. He had no baggage whatever.

“He told me he was out of the city a good deal, and from that I inferred that he was a travelling salesman. He seemed to come in only for his mail. He got a number of letters and a package of shoes at one time. One of the letters I saw. It was a medical circular or some such thing.

“He probably came only four or five times while I was here and a couple times when I was out. It was always in the morning or the afternoon, and he seldom stayed more than half an hour or an hour. I didn’t see him when he left, but he left the keys with somebody else. He came before the first week was up and paid for a second week. Then he left before that week was up. Some letters came for him after he had left and the janitor sent them back to the post office.

“He never had any visitors, Anna Aumuller of anybody else. He seemed urbane, polished and dignified – everything that would make a gentleman. I never saw him without his overcoat. He wore a black overcoat and a white muffler and a derby hat. He once said, ‘I’m a real Dutchman,’ and I took it from that that he was from Holland. I read of the Van Dyke in the papers in connection with the murder and then saw his picture. I noticed the resemblance. He had big, full eyes, as in the photograph.”

It was said that several women had been smitten with Schmidt while he had the West Eighty-fourth street room. Mrs. Manzer denied this emphatically.

“There was only one woman who was ever smitten with him while he was here – Mrs. Beals, a wealthy Cuban widow. It isn’t true that he left here because she forced her attentions on him.

The inquest held in Jersey City last night over the parts of the body which have been recovered from the Hudson River was a purely formal proceeding of about an hour and a half. A dozen witnesses identified the brown paper in which the pieces of the girl’s body were wrapped or told of identifying the dismembered corpse.

A jury of six men brought in this verdict after a half minute’s deliberation:

“This jury finds that Anna Aumuller met her death on or about September 2, 1913, at the premises at 68 Bradhurst avenue, in the city and county of New York, at the hands of Hans Schmidt.

“We recommend that action in this case be taken by the New York authorities.

“We also recommend that the parts of the body now in the possession of the Hudson county authorities, together with the paper, wire and other articles, be turned over to the New York authorities.”

So ends New Jersey’s concern with the murder. The recovered portions of the girl’s body – upper and lower torso and a leg – will be taken to the New York Morgue this morning.

Hans Schmidt will be taken to the Morgue at the foot of East Twenty-sixth street and made to look upon the body he cut to pieces. The police believe that then he will give them the last items of confession to make the case against him complete.

Schmidt will be brought to trial for the girl’s murder next month before Judge Warren W. Foster of General Sessions.

His defense will be insanity, because that is the “only possible defense,” according to his lawyer, Alphonse Koelble.

Inspector Faurot at Police Headquarters spent the day delving further into the histories of Schmidt and Muret. Finger prints of both men were forwarded to Germany to see if they could be identified there. The inspector was especially anxious to obtain certain proof from Germany that Schmidt is the man known there as Hans Schmidt, a priest who got into trouble many times in Germany.

Muret was taken from the Tombs yesterday morning to the Court of Special Sessions and arraigned before Justices McInerney, Collins and O’Keefe on a charge of having a revolver in his possession. It was found in his rooms when he was arrested. On the request of Assistant District Attorney Wilmot he was remanded to the Tombs until October 2 in order that the secret service may look into the evidence that he was Schmidt’s associate in making counterfeit money.

Inspector Faurot said yesterday that he might arrest a third man in connection with the counterfeiting and other exploits of Schmidt and Muret. He would not give any particulars, but said that if there was a third arrest it would be fully as important as the first two.

Meanwhile Schmidt’s counsel was visiting the slayer in the Tombs. The lawyer found Schmidt a sick man. The priest had suffered from vomiting spells and had been treated by the prison doctor. Mr. Koelble denied a report that Schmidt is suffering from blood poisoning.

Secret service men said yesterday that they are satisfied they have a conclusive case against both Schmidt and Muret for counterfeiting. Schmidt said he had not intended to pass any bad money until he should have a lot of it on hand. Passing it was part of some scheme for “benefiting the poor by making them rich with a lot of money,” according to the priest.

Detectives from the West 125th street station found in Schmidt’s rooms at the rectory last night a photograph showing both sides of a death certificate bearing the name of Robert Smith, 69 years old, who died on April 29 last at his home, 215 West 122d street. The certificate showed that Smith was attended by Dr. J. J. Slevin of 47 East 126th street.

The detectives found that the photograph had been taken at a gallery in Manhattan street.

Mrs. Smith said last night that Schmidt had not obtained the photograph from her. The priest attended her husband several times during his last illness, she said, and administered the last rites of the church.

There was also found in Schmidt’s room a letter written in German, addressed t Anna Aumuller. It bore no date and had not been mailed. Schmidt wrote that he was going to leave the city and was going out West and that she might address him in care of a friend in Cincinnati. The friend’s name was not given.

Another note found in the priest’s room was addressed to Helen Green.