Schmidt in Rage as Sanity is Tested 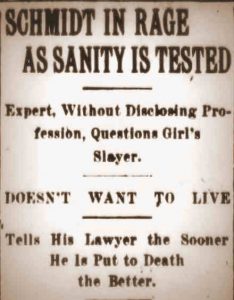 Schmidt in Rage as Sanity is Tested

Tells His Lawyer the Sooner He Is Put to Death the Better.

Hans Schmidt, the murderer of Anna Aumuller, was examined in the Tombs yesterday afternoon by Dr. Gustav Scholer, a member of the board of managers of the State Hospital for the Insane on Ward’s Island. He didn’t know until near the close of an hour’s talk that his visitor was a physician interested in his defense, and then, according to his lawyer, Alphonse G. Koelble, Schmidt exclaimed “Why bother yourself about me so much? Go ahead and expedite this thing. I’m going to the electric chair.”

Dr. Scholer said it would require other examinations before he could fully satisfy himself as to the man’s mental condition.

Coroner Feinberg said last night that if men like Cornelius Vanderbilt, Theodore P. Shontz, J. P. Morgan and Otto Kahn are available he would like to have them or men in their class on the jury at the inquest into the death of Anna Aumuller. He said it was his idea to get the most prominent financiers and business men on the jury panel if such a thing is possible.

Schmidt refused to attend mass yesterday and remained in his cell until the service was over. Dr. Muret, accused of being Schmidt’s partner in counterfeiting operations, attended the service conducted by the Rev. George Saunderson, an Episcopal clergyman. He joined in the closing hymn.

Before leaving the Tombs, Dr. Scholer made this explanation of his visit:

“At the request of Schmidt’s counsel, I made, as a physician and alienist, an examination of the man, but I am pledged not to say anything about the results. We spoke in German. I made an examination into his family history. I knew the town where he was born and where he was raised. He knows some of the people I know in Mayence and in Munich. I went into the details of his former life to bring out what led up to the crime.

“The man didn’t know I was a doctor. He got angry when I advanced the theory that he might be mentally unbalanced. He admits he did many things that were wrong – ‘perverse’ he called them. I questioned him about his delusions. He will not accept any idea of insanity whatever.”

Mr. Koelble declared that he was convinced more than ever after his talks with the alienist for the defense that Schmidt was insane.

Inspector Faurot, who was expected to make important disclosures of new evidence yesterday, said in the afternoon that the disclosures would have to be deferred for a day or two. He added that the police are satisfied that Dr. Muret is Herman Artur Heibing, wanted by the police of Germany. In Muret’s possession when he was arrested was found a certificate of membership of Heibing in the Hamburg Y.M.C.A.

The inspector has obtained a copy of the Deutsches Fahndungsblatt, the general criminal description paper published at Berlin, bearing the date of November 5, 1909, telling of a warrant issued for the arrest of Heibing.

Heibing – A warrant has been issued on a charge of fraud against a merchant, Herman Artur Heibing, born February 7, 1884 at Nakel, province of Posen; lately in Schwenenberg, near Hamburg. This crime was committed 10, 29, ’09. Warrant issued at Schwenenberg. Arrest and deliver to the nearest court prison.

Heibing was described as being 6 feet tall, well built and having black hair, blue eyes and brown eyebrows.

“We are positive that Muret and Heibing are the same,” said Faurot. “We have traced them by another source too.”

In the Deutsches Fahndungsblatt under the date of May 17, 1912, is the publication of another warrant against E. A. Heibing for the “swindle committed acting in concert with others.”

In their investigations into the life of Muret the police have learned that he came from England six and a half years ago. For a time he operated for one Farara at 606 La Salle avenue, Chicago, where he was known as Dr. Held.

Muret was employed by A. M. Stewart, a dentist at 207 East Thirty-fourth street, on July 21, 1911, and worked until July 29, 1911. While at this house his door was forced open on July 21 and he was found suffering from concussion of the brain, having fallen and struck his head against a door. He was taken to Bellevue Hospital and described himself as a clerk. It was said at the hospital last evening that Muret was found after his admission to be suffering from neurasthenia.