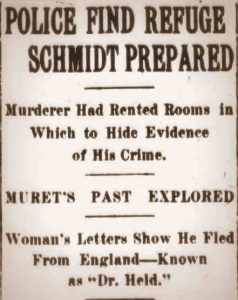 Murderer Had Rented Rooms in Which to Hide Evidence of His Crime.

More light was let into the dark past of Hans Schmidt, the self-confessed counterfeiter, murderer and imposter, yesterday by the discovery that after killing Anna Aumuller, the rectory maid who loved him, he rented a flat at 2562 Eighth avenue and took there two suitcases containing among other things apparel and sewing work belonging to a woman, including a little garment for a baby. This makes the third flat which Schmidt is known to have used in his complicated criminal designs. The first was at Bradhurst avenue, in which he dismembered the body of the murdered woman and from which he carried the fragments to the Hudson River, where he threw them overboard. The second was at 526 West 124th street, where the counterfeiting plant was found which led to the arrest of Ernest Arthur Muret, the dentist who practiced without authority at 301 St. Nicholas avenue. The police are satisfied that Schmidt, fearing that the grewsome secrets of the Bradhurst avenue flat would become known, secured the rooms on Eighth avenue for the purpose of removing all his effects there. But pursuit drew too close as the result of Inspector Faurot’s work with the pillow slip clue and Schmidt abandoned his plan and sought the shelter of the rectory.

The police turned up documentary evidence yesterday tending to show that Schmidt’s alleged partner in the counterfeiting game, Muret, was obliged in 1911 to leave London because the police were after him. Furthermore they have reason to believe from a telltale diploma seized among the dentist’s effects, that he was known in Chicago and elsewhere in 1909 and later as Dr. Arnold Held. The connection between Schmidt and Muret in their alleged plan to print spurious money was strengthened by the events of the day and the secret service men were so convinced that one was just as culpable as the other that warrants charging counterfeiting were lodged at the Tombs for their arrest. Father Evers, the Tombs Catholic chaplain, said last night that his conviction becomes constantly stronger that Hans Schmidt was never authorized to exercise priestly functions; that the real Hans Schmidt, the priest, is dead, and that the murderer of Anna Aumuller is a person who perhaps stole the dead priest’s credentials. “The nature of his various crimes indicates that the prisoner is a most remarkable criminal,” he said. “Why isn’t it fair to assume that perhaps he sought to personate a priest in order to have a cloak for his crimes?”

A Detective for a Neighbor.

Curiously enough, the Eighth avenue house to which Schmidt planned to move had among its tenants Detective George Blewitt and his sister, Miss Frances. Miss Blewitt happened to see Schmidt when he secured the rooms on September 5 and she remembered his face when pictures of the murderer appeared in the papers. She conferred with the janitress, Mrs. Dowd, learned that the new tenant had been very particular about the door locks and window fastenings, and then she told her brother of her suspicions, and so the information found its way to Inspector Faurot. Schmidt had given the name Jacob Schneider and had paid Mrs. Dowd $5 deposit, promising to pay $16, the balance of the rent, next day. On that day he moved in, bringing a leather suit case, another of woven straw and that was all. When the police searched the flat they found besides tje suit cases a coat and waistcoat which seemed to match the trousers left by Schmidt in the murder flat in Bradhurst avenue. The coat bore on a label the name “A. Van Dyke,” a name the police already knew Schmidt had assumed. Crammed in the suit cases by an apparently hurried hand were also found women’s wearing apparel, including two pairs of black stockings, a pair of long white linen gloves, a pinafore, besides thread and needles and a strip of embroidered “A’s,” the initial of the murdered young woman. Then there was a baby’s undershirt, a small one, which the police believe was purchased by the expectant Anna Aumuller in one of her happy moments. There was also some lavender cloth for a dress, a small one, which had been cut for the making.

The police also found in the queer assortment of stuff the picture of Schmidt, with a beard, in the garb of a priest. This was taken before Schmidt was obliged to leave Germany. These discoveries indicated to the police that Schmidt did not act altogether in an insane manner when h rented the flat in which to hide his possessions, leaving the other apartment empty, save for the bloodstains, which he could not wash away. Letters and papers taken from Muret’s trunk by Detectives Mulligan and Haley added information as to Muret’s past that he had been holding back. One exhibit was a diploma, apparently issued by the College of Mechano-Therapy of Chicago to Arnold Held. It was dated May 14, 1909, and bore the names W. C. Schultz, M. D., president; F. S. Tinthoff, secretary; K. H. Schmidt, B. M. T.; E. H. Bromund, M. D., and S. J. Tinthoff, treasurer.

With the diploma was a certificate which bore the picture of Muret and was executed by Paul Haley, a notary public of Cook county, Illinois, attesting that the picture was that of the man entitled to practice by virtue of the diploma. Held’s address was given as 476 North Clark street, Chicago. There was an enamel sign of “Dr. A. Held” and card inscribed Dr. Ernest Muret, 1 to 3 P.M. or by appointment,” and this address, 1 Gloucester Chambers, 2 Gloucester street, London, W. C. Several letters addressed to Dr. Ernest Muret in London and Hamburg came out of the trunk, in two of which Vera Harris, who signed herself in affectionate terms as “darling wife,” gave the police their first direct tip that the police of another city had been hunting for Muret. Vera Harris, writing from 13 First street, corner Walton street, Brompton road, Chelsea, S. W., told Muret that the detectives were on his trail. In another letter she said that it would be safe for him to return, as by fixing himself up with a beard and eyeglasses he could escape recognition. In Muret’s bureau drawer the police found to their amazement a false mustache and a beard. The ends of the mustache were nicely waxed. They also got a priest’s robe and about 2,000 pieces of stationary of various grades.

All the paraphernalia of the counterfeiting plant at 516 West 125th street was turned over yesterday to Chief William Flynn of the secret service. “It is a complete outfit,” said Chief Flynn. “The press, however, was pretty small, but still could be used effectively.” In the outfit were 100 photographic negatives, many of them broken and cleaned off. “An attempt was undoubtedly made to clean up after Schmidt was arrested for the murder,” said Flynn. “Muret probably cleaned up the negatives in a great hurry.” Evidence of counterfeiting consists of the counter and seal numbers and seal of a ten dollar gold certificate on white paper partly burned, and an incompletely etched copper plate of a twenty dollar bill. Capt. John J. Henry of the secret service was told by Schmidt at the Tombs yesterday that the idea of counterfeiting came to him while he was in Munich. Schmidt said he did some experimenting at Muret’s dental office and more at the counterfeiting flat. He wanted to make money, he said, to make the poor happy. Detectives Mulligan and Haley opened the safe in Muret’s office yesterday afternoon, but found nothing especially significant. There was a receipt for a safe deposit vault int he Mount Morris Bank, dated February 2, 1913, but the box contained only insurance papers and some letters.

Muret was taken from the Tombs in the afternoon to the District Attorney’s office for a talk with Assistant District Attorney Deacon Murphy. Muret said that he met Schmidt a year ago and they had been friends until August 15 last, when they had a quarrel. He next saw Schmidt on September 2 and noticed that he had a cut hand. “Schmidt told me,” said Muret, “that in a spirit of fun a priest at the rectory threw a glass at him and cut him.” District Attorney Whitman upon his return to the city yesterday said that the case against Schmidt will be pushed as speedily as possible. Assistant District Attorney Delahanty will prepare the case for the Grand Jury, working in conjunction with Mr. Murphy. The trial will probably take place next month. The inquest in the case of Anna Aumuller will be held at Heller’s Hall, in Newark avenue opposite the court house, Jersey City, this evening. If a verdict is reached at the first session, which is probable, all that the river has given up of the dismembered body will be removed from Volk’s morgue, Hoboken, to this city on Friday.

Schmidt wrote a number of notes yesterday in response to questions sent up to his cell. He denied that he had ever taken any money from persons in the confessional. He said that there never had been any baby born in Anna Aumuller, insisted that Muret never knew her nor had any knowledge of the Bradhurst avenue or Eighth avenue flats. He repeated his denials that Muret knew anything about the murder and attempted in various notes to shield him. The harbor police dragged the Hudson yesterday off 152d street in the hope of finding the murdered girl’s head. This was done because a fisherman reported having drawn up a heavy object, losing it before it came to the surface and finding human hairs on his hook. Inspector Faurot said at Police Headquarters last night that there might be another arrest in the case, that of a material witness. It was rumored during the day that a woman was to be arrested, but the Inspector declined to say whether that was the fact. The detectives learned last night that a man named “Van Dyke,” one of Schmidt’s aliases, was in the habit of receiving mail at 124 West Eighty-fourth street. Among Schmidt’s belongings the police found a letter signed “Helen,” written from “Apartment 12, Hillil Hall, 201 West 109th street.” It was said at that address last night that a Helen Green, who had lived in Apartment 12, had gone away, leaving instructions that her mail should be forwarded to Chicago. Among the curiosities of this extraordinary case is a copy of a letter which Schmidt sent to a priest in South Dakota, asking if there was an opening for him there. He wished to leave this city. “New York is full of temptations,” he wrote.