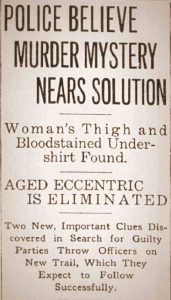 [Special to The Times-Dispatch.]

New York, September 10. – The new clues discovered in connection with the Cliffside murder mystery led the police to believe that a solution is in sight. A woman’s thigh was found on the shore of Raritan Bay, at Keansburg, N. J., and almost simultaneously a bloodstained undershirt was found in the woods near Cliffside, about a mile from where the upper part of the torso of the murdered woman was found.

It was learned late to-night that a man’s shirt, bearing stains that appeared to be blood, had been sent to the Princess Laundry at 2515 Seventh Avenue by a man giving the address of “H. Baloian, 2525 Seventh Avenue.” It was found that Baloian is an Armenian carpenter about forty years of age, who lives part of the time on a small truck farm in Staten Island. Occasionally he occupies a flat on Eighth Avenue, near 147th Street, his twenty-year-old daughter acting as his housekeeper. He conducts a cabinet-making shop at the Seventh Avenue address, but has not been at the shop for three days. Neither he nor his daughter had been seen at the Seventh Avenue flat for several days past. Access could not be granted to the flat to-night.

Descriptions of Baloian given by neighbors tallied with that of the mysterious men who purchased tar paper from Druggist Horwitz last week.

Peter Sternemann, the eccentric letter writer, whose sensational kidnapping by two newspaper reporters posing as detectives, stirred the police of two States yesterday was practically eliminated from the case to-day. Sternemann’s daughter, Ella, was located to-day at the home of a relative in Fresh Pond, L. I. She had found employment as a domestic and did not want her father to know where she was living, as he had brought about her discharge from several positions in the past, because of his interference with her work.

Sternemann was taken to the North Bergen morgue to-day and allowed to examine the two parts of the body found in the Hudson. After a careful scrutiny he said he could not be certain whether or not the body was that of his daughter. Later in the day the girl was located at Fresh Pond.

Sternemann is still in custody of the New York police, and Assistant District Attorney Murphy announced to-night that the man would be committed to Bellevue for observation as to his sanity. The man talked in a rambling disconnected manner to-day and insisted from time to time that the murdered girl was his daughter.

The discovery of the blood-stained undershirt was regarded by the police as the most important clue yet developed. It would seem to indicate that the murder was committed on the New Jersey side of the river and not in New York, as the police have believed until now.

Following the discovery of the bloodstained undergarment, one of the detectives working on the case said:

“This is the most important discovery so far. I cannot say more about it now, but I can say this much, it will enable us to solve the mystery.”

Whether of not the severed thigh found at Keansburg to-day is that of the Cliffside victim will not be known until to-morrow, when it may be taken to the Hoboken morgue, where the severed torso is.

Cuts Made by a Saw.

To-night the gruesome relic was examined in the North Bergen morgue by Dr. Field, of the Monmouth Memorial Hospital. Dr. Field stated that there was a clean amputation of the thigh at the upper end and another amputation just below the articulation of the knee joint. Both cuts were clean, and had evidently been made by a saw. The severed limb is fourteen inches in length, and is seven inches wide at the upper end and five inches wide at the lower end. It was in good condition, having been preserved by the salt water. Dr. Field was of the opinion that it had not been in the water many days.

The blood-clotted undershirt was found early Saturday morning by Mrs. F. H. Geomann, wife of a druggist, whose place of business is on Lawton Avenue, Grantwood. Mrs. Geomann found the garment near her doorstep about 6 o’clock in the morning. About 2 o’clock she said she had been awakened by the sound of a man running or walking rapidly past the house. This was followed by the noise of an automobile going at top speed. The blood on the garment was still wet when it was found by Mrs. Geomann. It was not until to-day that she thought of reporting the discovery to the police. Alongside the Geomann store is a road leading to the river-front, where the first part of the torso was found.

Still another clue was obtained to-day in the form of an inquiry by the mother of Lucy Smeads, aged twenty, of Keyport, N. J., who said she believed the victim might by her daughter, who had disappeared from home on June 1.

Samuel Altman, of Richmond, Ind., is reported to be on his way to New York, to try to identify the body as that of his wife, who left home on August 26 to come to New York.