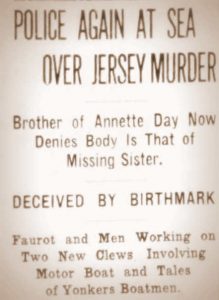 Brother of Annette Day Now Denies Body Is That of Missing Sister.

What was considered by the police to be the most promising clew to the solution of the murder of the young woman, three parts of whose body have been found in the waters in the vicinity of the city was set to naught late yesterday afternoon, when Francis D. Day, his sister Mary and brother Salvatore visited the Hoboken morgue and declared the torso there was not that of their missing relative.

Francis visited the morgue Friday night and positively identified the body from the birthmarks on the right shoulder. Again at Police Headquarters, where he was in conference with Inspector Faurot, he reaffirmed his identification, and when leaving headquarters said there was no doubt whatever in his mind that the victim of the mysterious case was his sister, Annette Day.

The birthmark on the shoulder was what led Francis Day to declare he had identified the body, he admitted yesterday. Although he said he had never inspected the marks in his sister’s shoulder carefully, he was sure Friday night that those on the torso were those on the skin of his missing sister, Annette.

One fact which convinced the Days yesterday that the girl was not their sister was the difference between the weight of the missing girl and the probable weight of the person whose body was in the morgue. Annette Day did not weigh more than one hundred pounds, it was asserted by her family, while the murdered girl must have been at least forty pounds heavier.

Inspector Faurot went to Hoboken yesterday afternoon to look at the parts of the dismembered body, and was at the morgue when the Days repudiated their identification. The inspector explained he had come to examine the body in order to be able to answer accurately numerous inquiries being made at his office.

“I was excited and worried,” Francis Day said yesterday, “and was deceived by the fact that the bluish birthmark on the dead body is almost exactly like that on my sister’s shoulder.

“My sister, however, was much smaller that the girl whose body was found. Annette did not weigh much more than 100 pounds, and her figure was not similar. Careful measurements were taken when I returned to the morgue again, and they prove that I was mistaken. In addition, we know positively that Annette was not in the physical condition that it is said the girl who was found was.”

There were two other developments yesterday which looked promising to the police at work on the case. One was being personally investigated by Inspector Faurot in Yonkers, and the other was a story told Leonard Marcy, of the North Bergen police force. The second story concerns the mysterious disappearance of a motor boat said to be owned by a physician and a young man who is employed in one of the offices in the downtown business section of this city.

The boat was taken from its mooring, the Harlem River and 145th street, about the time which has been definitely fixed for the commission of the murder and the disposition of the girl’s body.

When the first part of the body was found a week ago, the boat was seen at 145th street and the Harlem River, but the next day it went away, and nothing has been seen or heard of it since. The owners cannot be found. Marcy reported his findings to Inspector Faurot, who detailed men of his staff to investigate.

The other story is related by John Cummings and Louis E. Hecht, Yonkers boatmen.

Cummings told Inspector Faurot and the Yonkers officers that a week ago, about sundown, he rowed a stranger across the Hudson to the New Jersey shore. The man had a large suitcase, which was so heavy and large that it attracted Cummings’s attention. The man would not let Cummings touch it, but lifted it in and out of the boat himself.

The stranger did not give Cummings his name, but said he lived at 14th street and Ninth avenue, New York, and wanted to cross the Hudson to visit relatives who lived in one of the small houses at the foot of the Palisades. When the Jersey shore was reached the man gave Cummings 75 cents and disappeared. The boatman says his passenger weighed about 140 pounds, was slight in build and smooth shaven. He wore a gray suit and straw hat.

When Cummings returned to Yonkers Louis E. Hecht, another river man who works about the docks with Cummings, told Cummings that while he was gone two other men, both carrying suitcases, came and asked to be rowed across. Hecht informed them he had no boat and they went away. They told him they came from New York on a trolley. Hecht said they looked like Spaniards or Italians.

These incidents aroused suspicion in the minds of Cummings and Hecht, especially as the regular ferry to Alpine, N. J., was running at the time the strangers asked to be rowed across.