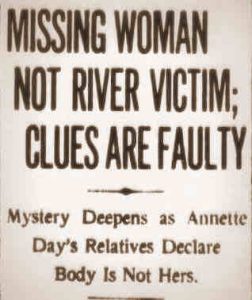 Mystery Deepens as Annette Day’s Relatives Declare Body is Not Hers.

Once more the evil genius of the Hudson River mystery has moved to block the solution of the puzzle, now a week old, and to uncover to the world intimate facts in the lives of people whose existence has no relation to that of the murdered woman.

Salvatore and Mary Day, brother and sister of missing Annette Day, of No. 206 Union street, Brooklyn, went to Volk’s Morgue in Hoboken this afternoon, where last night their brother, Francis, had declared it his positive belief that it was his sister’s haggled body that lay there. After carefully viewing the upper and lower portions of the female body on the slab the brother and sister stated with equal positiveness that they were not fragments of Annette’s body.

Mary Day, who was better able to judge of marks upon her sister’s body, carefully examined the birth mark on the left shoulder blade and declared that though it was very like that on the body of Annette the marks were not identical.

Body of Dead Woman Larger Than Hers.

The girth of the woman’s body was greater that that of her sister, she added, there was evidence that the dead woman possessed a more developed and muscular figure. While Annette Day weighed in the neighborhood of 100 pounds, the portions of the murdered woman’s body, so far recovered, indicate that, in life, her weight must have been something like 140 pounds.

Capt. Coughlin of Brooklyn Headquarters and Detective Duane escorted Francis Day, his brother and sister to the Hoboken Morgue. Inspector Faurot of Manhattan Headquarters and Detective Clinton Wood later joined the party. The three Days spent some time at their unpleasant task and when Salvatore and Mary Day emphatically denied that the body was that of their sister, Francis, the identifier, agreed he must had been mistaken.

Police Just Where They Were at the Start.

This leaves the whereabouts of Annette Day a matter purely of family interest unless they ask the police to send out an alarm for her.

Inspector Faurot admitted that the collapse of this last clue in the case of many false leads leaves the authorities just where they started. They have now positively no index to the identity either of the murdered girl or the murderer. The case bids fair to pass into history along with that of Marie Rogers of nearly a century ago – the girl whose unsolved murder in the Weehawken meadows near where the fragments of the present body were found gave Edgar Allan Poe the opportunity to write one of his greatest mystery stories.