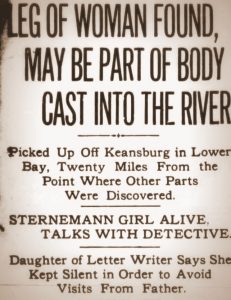 Leg of Woman Found, May be Part of Body Cast into the River

Picked Up Off Keansburg in Lower Bay, Twenty Miles From the Point Where Other Parts Were Discovered.

Daughter of Letter Writer Says She Kept Silent in Order to Avoid Visits From Father.

A portion of a woman’s leg, cleanly cut just below the hip at one end and just above the knee at the other, was found at Keansburg, N. J., by two young men this afternoon.

Irving Broander and Norman Carhart found the relic. They reported the discovery to the local police and [coroner] Harry Fay of [Bed Bank?] was notified. He went over to take charge of the limb.

It is in an almost perfect state of preservation and the cuts at either end indicate that they were done by unusually sharp tools.

Hudson County Officials to Examine it.

Hudson County officials will go down to Keansburg to-night to view the leg and bring it back to compare it with the fragments of the body now in Hoboken morgue.

Assistant District-Attorney Murphy announced late this afternoon that he would apply at Night Court to have Peter Handel Sternemann committed to Belvue for observation as to his sanity.

Ella Sternemann, daughter of the ready letter writer, Peter Handel Sternemann, is not dead and lying in partially assembled fragments on a slab in the Hoboken Morgue as her father has insisted by letter and word of mouth.

She was interviewed to-day by Detective William Maher of the Glendale station in the home of John Ruthman, a distant relative, at No. 1583 Silver street, Fresh Pond, L. I. Ella Sternemann does not live there. She went by appointment, and only after much persuasion by the detectives, led by Ruthman and his family, to induce her to meet Maher and clear the mystery of her whereabouts.

The girl is working as a maid in a home somewhere in Greater New York. Ir was only upon the word of Inspector Faurot at Headquarters that her present address would not be revealed that she consented to meet the detectives at the home of Ruthman, one of whose daughters is the wife of John Sternemann, a half-brother of Peter of the ready pen.

Keeps Her Address Secret From Father.

Ella Sternemann told Maher she had not come forward sooner and revealed herself because she did not want her father to know where she was. She had been discharged from three or four positions in the past because her father had come around and interfered with her work, she said. Furthermore, she was tired of supporting him. He was prone to take all of her earnings for his own use.

“I have been away from my father for four years for the reason that he would not let me keep the money I earned.” Ella Sternemann told Maher, “When my name began to appear in this murder mystery I was horribly shocked, but I did not dare clear up the mystery for fear my father would find out where I was.

Detective Thiel took to Weehawken headquarters this afternoon a woman’s undershirt marked with what seemed to be bloodstains. It was found two days ago by a hut dweller who was afraid to tell the police about it until to-day. The shirt was lying under a board, back from the shore and about a mile from where the first piece of the body was found.

Following the opera-house “arrest” of Sternemann by three men purporting to be detectives, who took him from his home at No, 118 Globe avenue, Jamaica, shortly after midnight yesterday morning, Murphy found the eccentric milliner in the office of a morning paper at 2 o’clock this morning. The representative of the District-Attorney’s office obtained only a rambling and semi-coherent statement from Sternemann.

Totally at a loss for definite clues either to the identity of the victim of the fiendish murder or the murderer or murderers, Inspector Faurot at Headquarters and the men working under him in co-operation with the Hudson County authorities eagerly seized upon a report from Richmond, Ind., which came early to-day, bearing the earmarks of a “good lead.”

Samuel Altman, a tailor of Richmond, has sent a message here to the effect that the meagre marks of possible identification about the body and its wrappings tally exactly with those which might be found on his missing wife, who ran away from him on Aug. 26, bound for New York.

“The mark shaped like a triangle on the left shoulder-blade of the body might be an “L” which was tattooed on that spot on my wife’s body when she was a younger girl,” read Altman’s message. “Her maiden name was Lillian Carpenter. She had the initials ‘L.C.’ tattooed in tiny letters on one hand and the initials ‘F.F.’ above the elbow on one arm.

“Much of our bed linen, which she took with her, is embroidered with an ‘A’ similar to that found on the pillow-case in which one portion of the body was found.”

Along with the general knocking out of clues to-day was the collapse of the “bloody shirt” mystery. Morning papers commented upon the finding of a red stained shirt in the Princess Laundry at Seventh avenue and One Hundred and Forty-seventh street. Investigation showed that the garment was the property of one Baloin, a carpenter at No. 2527 Seventh avenue. The “blood” was plain mahogany polish.

The Weehawken authorities have summoned Van Brunt Tandy of No. 165 Seventeenth street, Brooklyn, to appear before them to-day and explain why an automobile, reported to bear the number 32,250, under which his machine is registered, was seen Friday night rushing away from the scene where the second part of the murdered woman’s body was found subsequently. The Evening World investigated the rumor of the suspicious auto two days ago, before the Weehawken police learned it, and found that Mr. Tandy’s machine was not in Jersey on the night reported.

It is admitted by the detectives that although they have several clues, they have accomplished practically nothing toward clearing up the mystery. The more they delve into the case, however, the more convinced are they that the young woman was slain somewhere in the vicinity of Eighth avenue and One Hundred and Forty-sixth street.

Their latest discovery points to a man about 5 feet 7 inches in height, with a stubby black mustache, as a suspect. He is described as about fifty years old, and his supposed connection with the case is based on the fact that he bought two sheets of tar paper such as was wrapped around parts of the torso, from S. H. Hurwitz, a druggist, on No. 2755 Eighth avenue, early last week.

Hurwitz’s store, near One Hundred and Forty-seventh street, is almost directly across the street from George Sach’s place, where the pillow ticking was obtained. Hurwitz remembers the purchase of the paper because it was the first time in months that any of it had been called for and because of the actions of the purchaser.