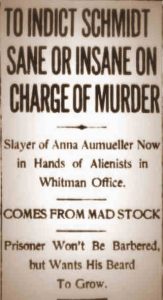 Slayer of Anna Aumueller Now in Hands of Alienists in Whitman Office.

Prisoner Won’t Be Barbered, but Wants His Beard To Grow.

In order that the alienists who have been selected by the District-Attorney to examine Hans Schmidt, the slayer of Anna Aumueller, may have ample time for their task, the inquest, which had been set for next Saturday has been postponed until Friday, Oct 3. By that time Schmidt’s mental condition will have been determined by three alienists, two of whom, Dr. Charles F. MacDonald and Dr. William Mabon, have already been selected by District-Attorney Whitman.

Schmidt was taken from the Tombs to District-Attorney Whitman’s office this afternoon. There, in the presence of Mr. Whitman and Assistant District-Attorney Delahanty, he was given a preliminary examination by Drs. MacDonald and Mahon. Alphonse Koelble, Schmidt’s counsel, was not present.

To Indict Schmidt, Sane or Insane.

Should the District-Attorney’s alienists report Schmidt insane, an indictment against him charging murder in the first degree will be found nevertheless. Then he will be arraigned before Judge Foster in the Court of General Sessions, who will determine whether or not a jury is to finally pass upon the prisoner’s mental condition.

Further information about Schmidt’s family was given to the authorities today by Rev. Father Franz Markert, now stationed in a remote Illinois parish, who is visiting in New York. He was a classmate of Schmidt in Mainz, Germany, and comes from Aschaffenberg Schmidt’s native place.

“Schmidt’s family,” said Father Markert, after a visit to the accused murderer in the Tombs today, “is one of the best of the middle class of the Hesse-Darmstadt district. Schmidt’s father is in the railroad service and his standing is of the highest.

“Schmidt has four brothers and one sister living. His eldest brother, Wilhelm, is in the postal service; another brother, Henry, runs a railroad station restaurant; a third, Charles, is a prominent railroad official, and the fourth, Leo, is a merchant. The sister is married.

Insanity in Family on Both Sides.

“There is insanity in Schmidt’s family on both sides. His mother’s maiden name was Mueller. One of her brothers, a tobacconist in Maine, killed himself and this suicide’s daughter is in an insane asylum.

“It is true that the man known as Dr. Muret bears a striking resemblance to Schmidt and may be his cousin. I asked Schmidt about it when I visited him today. He denied most positively that he is related in any way to Muret.

“Schmidt was a brilliant scholar in college at Mainz. He was particularly proficient in physics and chemistry and used to assist the professors in instructing other students in these branches. At that time he was enthusiastic for the priesthood and his instructors said he was overly pious – that is, he spent too much of his time in fasting a prayer. Apparently this broke down his mind eventually.”

Inspector Faurot is investigating a report that Hoboken police have learned that Schmidt, disguised in a false beard, conducted a marriage bureau on Hudson Boulevard a year or more ago. The persons who say that they think Schmidt is the man who ran the bureau have not seen him, but say they recognize him from his pictures.

The Tombs barber went to Schmidt’s cell today and offered to remove the thick growth of hair that has accumulated on the murderer’s face since his arrest ten days ago. Because of Schmidt’s repeated wishes for quick death the Tombs authorities have not allowed him to use a razor himself.

Schmidt refused to be shaved. He said he wanted to grow a beard. Detectives say the beard will serve to protect him from identification in case other crimes are brought home to him.

To Indict Schmidt Sane or Insane on Charge of Murder, The Evening World, 24 September 1913, page 2, column 5.