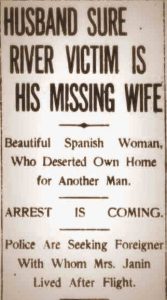 Beautiful Spanish Woman, Who Deserted Own Home for Another Man.

Police Are Seeking Foreigner With Whom Mrs. Janin Lived After Flight.

Casper Janin, a well-to-do Italian, of No. 303 West Thirty-third street, visited the Hoboken Morgue this afternoon and positively identified the fragments of the woman’s body there as those of his wife.

Janin said that his wife had deserted him on Aug. 14 and had gone to live with another man, whose name the Headquarters detectives now have and who is supposed to live on West One Hundred and Fourth street in the vicinity of Central Park West. Hudson County detectives accompanied Janin to New York, after he had made the identification, on a search for this man who is thought to have been with Mrs. Janin after her disappearance.

A short time after Janin made his identification Detective Wood of New York Headquarters staff called at the Hoboken morgue and took away the chemise which was found wrapped about one section of the woman’s dismembered body. This he brought to Headquarters, and his arrival was followed by a conference between Assistant Attorney Deacon Murphy and Inspector Faurot.

It was said by the Jersey authorities that the taking away of the chemise was for the purpose of running down still another clue, considered as important as the identification made by Janin. This concerned the disappearance of a woman who had been working as a domestic in the service of a family in a North Jersey suburb. The servant was dismissed then certain facts about her condition became apparent, so this new version of the mystery’s solution has it, and her three sisters in New York were notified of the fact by her employer. The woman has not been seen by her sisters since.

The identification was made possible chiefly by the strange birthmark on the left shoulder of the torso. The man claiming to be the husband of the murdered woman stated without equivocation that his wife had such a birthmark on her left shoulder blade, that her mother had the same peculiar figure in the same spot on her body and that a son born to him by the woman he now believes to have been slain has the inherited mark in the same place. Other physical characteristics the identifier was able to note tallied exactly with those of his missing wife, according to his statement.

A part of the man’s story was allowed to become public, though he himself was jealously kept away from interviewers. He said he was an Italian and his appearance bore out his statement that he was in more than comfortable circumstances. Six years ago he came to New York and here met a beautiful Spanish girl – a native of Barcelona – who was only fifteen years old. They were married and he took her back to Italy, where he had a successful business.

She soon left him and he followed her first to Turin and then to this country. She took with her all the jewelry he had showered upon her in the days of his swift wooing and at the time of their marriage – about $1,500 worth.

Following his wife to New York, he at last traced her to an address on West One Hundred and Fourth street, where she was living with a man of low character. The husband tried to induce her to leave her paramour, but in vain. Last month he said he went to the man who had usurped his place and demanded that he give up the woman. Then his wife’s companion said she had quit him also and he professed not to know where she was.

New York Police Are Not Notified of Identification.

Since that time the identifier has been on the still hunt through New York and the adjacent cities. He had read of the finding of the fragments of the body in the river, but has hesitated to come forward and attempt an identification, he said, until he saw a picture of the birthmark in a paper several days old.

The swift action of the Hudson County authorities in following the story of the man appearing at the Morgue to-day by active search in the vicinity of West One Hundred and Fourth street, this city, for the paramour of the missing wife, was a surprise to Inspector Faurot at Headquarters. He said he had heard nothing of the events in Hoboken and had not been apprised of the visit of the two New Jersey detectives.

Just before this new development came it was definitely established by County Physician Arthur P. Hasking of Hoboken that the section of a woman’s leg found yesterday afternoon at Keansburg, N. J., twenty miles away from the places where the two fragments of the body were discovered, was a part of the same body.

Dr. Hasking articulated the stump of the left thigh at the hip and took that fragment of the leg with him to Keansburg to-day. There he found that the bone and tissue of the leg found yesterday fit the severed thigh exactly. The quality of the skin and circumference of the leg were the same.

The detectives are investigating the story of Louis Odone a conductor, living at No. 640 Fillmore avenue, Union Hill, N. J., whose run is on the trolley following the river road out of Weehawken, that on the night before the first fragment was found at Shadyside a man with two heavy grips boarded his car near North Bergen. Such an offensive odor came from the grips that Odone ordered the man to get off. The passenger protested that he was going to transfer to the Fort Lee line, but finally got off the car before the transfer point was reached. This was in the vicinity of Shadyside.