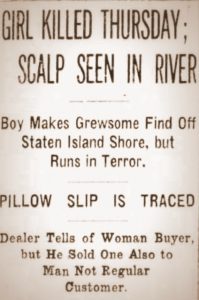 Dealer Tells of Woman Buyer, but He Sold One Also to Man Not Regular Customer.

The police now believe they have evidence that the slayer of the young woman whose torso was found on the New Jersey bank of the Hudson River began to dispose of the body as early was Thursday. They got this opinion when they heard the story of John Reid, a young Manhattan boy.

Detective Charlock, of County Prosecutor Hudspeth’s office, in Jersey City, found the boy at his home, at No. 2799 Eighth avenue. Young Reid told the detective that while he was fishing off Kreischerville, Staten Island, on Thursday afternoon, he saw the scalp of a woman floating in the water.

Not knowing what it was, he reached for it, but on seeing it close at hand he threw it back in horror. He described it as being the entire scalp of a woman, with long, dark brown hair, about eighteen inches long.

This would correspond with the description of the hair of Sternemann’s daughter Ella, which her father described as dark brown.

The boy said that when he learned he had seen a human scalp he rowed back to the shore and told his story to Anthony Elders, a retired policeman, with whom he was stopping. Elders was not at home last night, but others in the house said they had not heard of the story before they were told by newspapermen.

When Inspector Faurot heard the story he ordered a police launch to the scene and search was instituted in the hope that the scalp would be found.

The locating of the second hand furniture at 147th street and Eighth avenue, kept by George Sachs, where two pillows with the same fancy ticking as was used by the murderer in wrapping up the two parts of the torso were purchased, caused the police to make a canvass of the neighborhood.

Frank E. Bennet and William Charlock, detectives from the Hudson County Prosecutor’s office, and some of the local police are inclined to believe the murder was committed at some place in the neighborhood of Sachs’s store.

A police official at New York Headquarters last night held a different view, and said it was his opinion that the murder was committed in New Jersey, in the vicinity of Shadyside, where a part of the torso was found Friday. The official was not inclined to give his reasons for his theory.

Another discovery of the police which they hope will lead to a clew [sic] is the fact that S. H. Hurwitz, a druggist, almost directly opposite Sachs’s store, recalled having sold dark brown moth paper, not unlike that used in wrapping up the torso, to a man early last week.

The paper is somewhat darker in color than that used by the murderer, but the police are now making tests that they hope will establish whether the action of the salt water would bleach it and obliterate the name of the maker, which shows on the paper sold by Hurwitz.

Hurwitz said that some time during the early part of the week – he is not sure of the day – a man about thirty years old, 5 feet 11 inches in height and weighing 150 pounds, and in his shirt sleeves, bought two pieces of moth paper.

Another purchaser of this same sort of paper, it was learned yesterday, went to the drug store of H. S. Rehn, at No. 2516 Seventh avenue, which is near 147th street, at 2:30 o’clock Tuesday. The proprietor described the buyer as a girl about twenty-five years old, 5 feet 6 inches in height and weighing about 140 pounds. He said that she came in without a hat, breathless and much excited, and hurried out without waiting to have it wrapped up.

When the makers of the papers were asked yesterday afternoon if salt water would bleach it they said they could not say.

Sachs had the named and addresses of eight of these purchasers. Seven of them were found, but none had the pillow in which the police were interested. The eighth is a Japanese named Haski, who moved from No. 251 West 145th street two months ago. He is now living somewhere in a furnished room in West 110th street.

Sachs believes that he sold the two pillows with the fancy ticking to strange people. He could recall that one was the middle-aged woman, but his memory is a blank as to the purchaser of the second.

Scores of detectives at work in each of the boroughs were bending all their energies yesterday toward unraveling the mystery. No less zealous were the police of Bergen and Hudson counties, in New Jersey.

Nothing of any real value was discovered, and the police were kept busy running down false clews.

The New York police are now inclined to the theory that the girl was murdered in New Jersey, while the police of New Jersey say the crime was committed in New York.

At Police Headquarters in this city last night one high official said he believed the scene of the murder was in New Jersey. He would not give his reasons.

Inspector Faurot, in charge of the Bureau of Criminal Identifications, received a call over the telephone at noon yesterday.

A man’s voice announced that Ella Sternemann might be found concealed in a house at Fresh Pond, Long Island, if the police would display a little energy. After saying the girl might be found at Ruthman’s bakery, at No. 1583 Silver street, the man hung up the receiver.

It was found out later that the man telephoned from “Harlem 379,” and the police say they learned that his name was A. A. Schaffer. Inspector Faurot communicated with the police at Fresh Pond, and Detective Van Weidenstein, of the Glendale avenue station, made an inquiry.

At Ruthman’s bakery the owner said Ella Sternemann was not there, but that she was employed there two years ago. He said she was a pretty girl and very conscientious in her work, but that she decided to leave and try to find easier work. She got a place in a silk mill in the neighborhood, but found the work even harder, and left after two days.

Schaffer went to the bakery yesterday morning without coat or hat, dishevelled [sic] and greatly excited, Ruthman said, and accused him of keeping the Sternemann girl shut up there. Ruthman put him out. This was only one of a number of false leads received by the police.

The police at Weehawken were informed over the telephone last night that a trunk containing the head and arms of a woman had been washed ashore at Shadyside, where the first part of the torso was found.

The police placed no confidence in the information, for they knew a water-logged trunk had been lying on the beach at that point for more than two weeks. Lieutenant Kennell was sent to investigate, and all he found was the trunk he expected to find, with nothing but water in it.

Another “tip” came from Spring Valley, N. Y. From there the Weehawken police received a postcard signed Mrs. Elsie Thoms. It said Mrs. Thoms’s daughter Lulu eloped with a dentist’s helper of Hoboken in June. Mrs. Thoms said she believed the murdered girl whose body is in Volk’s morgue was her daughter.

A detective was sent to Spring Valley, where he found the mothers had built her belief on the idea that there was a single mole on the left shoulder of the murdered woman.

A man called up Volk’s morgue in the afternoon and said his name was Anderson. He asked for a description of the body. He would not give any particulars of himself, but said he would visit the morgue this afternoon at 4 o’clock. He was particularly anxious to learn all about the pillow slip with the embroidered “A,” which was used by the murderer to wrap up one part of the torso.

There were two visitors at Volk’s morgue yesterday who asked to see the torso. One was a well dressed woman, who when she got a description from one of the custodians said the body was not that of a missing friend.

The other visitor was a woman of eighty, who said she was Mrs. Connors, of No. 232 West 16th street, Manhattan. She said her daughter, Mrs. Margaret Gales, forty years old, had been missing for two months. She was not permitted to see the torso, for the reason that the murdered woman was not more than twenty-five years old.

The police also ran down a story that early Friday morning a black and a red touring car, bearing a New York license tag, was driven down Hudson Boulevard and turned into a narrow road that led to the beach at Shadyside at a point near where the first part of the torso was found that afternoon. There were three men in each car.

The New Jersey police have almost completed a canvass of all pleasure craft on their side of the river, but as yet have found none which indicated that it was used by the murderer.

Sergeant Michael Lyons, of the Weehawken Detective Bureau, made tests yesterday in the Hudson at high tide to determine id an object of the buoyancy of the two sections of the torso would drift from the Manhattan shore at a point near Spuyten Duyvil Creek to the shores of Shadyside and Cliffside.

The tests were not altogether satisfactory. While the current carried the objects toward the shore, bits of driftwood prevented them from reaching shallow water. So battered around were the objects of the test, which were wrapped and tied in the manner in which the torso was packed, that much of the wrapping was removed from them.

Sergeant Lyons said that if the same conditions prevailed when the parts of the torso were thrown into the Hudson, if thrown in at the Manhattan side, as obtained yesterday the thick paper would have been torn.

Dr. George W. Schlemm [sic] King, the County Physician who performed the autopsy, said last night that he had ordered an inquest to be held. He said that the skin showing the birthmarks on the left shoulder would be preserved. Coroner Schlemm said that he would impanel a jury as soon as the necessary witnesses could be rounded up.

[By Telegraph to The Tribune]

Syracuse, Sept. 9 – Miss Jeannette Genevieve Norman, though to be the New Jersey murder victim, by some publicity experts, is with Prince Ismail in a Hindu show at the New York State Fair. She came here on Friday, having taken the Manhattan Line boat from New York to Albany. She says her friends in New York know where she is and they have no reason to believe she is in Volk’s morgue in Hoboken.