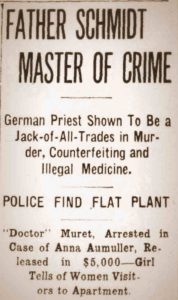 German Priest Shown To Be a Jack-of-All-Trades in Murder, Counterfeiting and Illegal Medicine

Father Hans Schmidt, the priest of St. Joseph’s Church who is in the Tombs charged with the murder of Anna Aumuller, stood revealed yesterday, after Inspector Faurot’s investigations resulted in the arrest of his associate, Ernest Muret, as a criminal jack-of-all-trades.

Murderer, counterfeiter, fake medical practitioner, forger and impostor were the terms written after his name in the police record, and the detectives who disclosed this pentateuch of crime insisted that the priest, far from being insane, in reality was the possessor of a master mind.

Alphonse G. Koelble, his lawyer, after a talk with the priest in the Tombs last night, said Schmidt admitted that he committed the murder, or, as he termed it, “performed the sacrifice”, that he was preparing to manufacture counterfeit $10 and $20 bills, and that he had another impersonation in which he posed as “Dr. Emil Moliere,” in which capacity he was working on a medicine which “would reduce the number of children in the world.”

Admissions by the priest also established the other charges, and as to the counterfeiting and illegal medical practice, Koelble said, Father Schmidt insisted that he was following out those lines under God-given commands.

Alone in Crimes, He Avers.

Ernest Muret, a man who was practicing dentistry at No. 301 St. Nicholas avenue, was associated with Schmidt in the counterfeiting affair at a flat they rented at No. 516 West 134th street, according to the police, but Schmidt told both Koelble and Father Luke J. Evers, the Tombs chaplain, that Muret was not an accomplice in the counterfeiting business and that he knew of the murder.

Inspector Faurot is not entirely satisfied at this point, however, and while he had Muret held in $5,999 bail on the technical charge of a violation of the Sullivan law, he is actually holding him for the purpose of investigating his entire association with Schmidt. Faurot has received information tending to show that Muret was in the Bradhurst avenue that after the murder of the Aumuller girl there.

There is a striking resemblance between Schmidt and Muret, which Inspector Faurot believes may lead to establishing the fact that their association was predicated on blood relationship, but so far nothing has been learned from either man to substantiate this theory.

The United States Secret Service will take Muret in hand on the counterfeiting charge if the New York police decide he cannot be of any service to them in the murder case. According to William J. Flynn, chief of the Secret Service, some poor imitations of $10 and $20 bills recently were passed at several places in New England, and in a general way the descriptions of the men who circulated them correspond to those of Schmidt and Muret.

In this connection Koelble asked Schmidt where he spent the three months intervening between his service as a priest at St. Boniface’s Church and his later service at St. Joseph’s. But Schmidt insisted that he remained in New York in that time, except for two or three short trips into New Jersey.

Inspector Faurot’s investigations yesterday disclosed that Anna Aumuller threatened to kill Father Schmidt in the presence of a doctor on whom they had called a month ago. The doctor told Faurot that the threat, while given in a sort f half-serious way, might be taken into account as bearing on the motive for the murder. When Schmidt called on this physician he was in citizen’s clothes and the doctor had no idea that he was a Catholic priest.

Bertha Zech, the servant in Muret’s flat, who was taken into custody early yesterday morning under Faurot’s orders, was released upon her promise to hold herself in readiness to testify as a witness.

Coroner Feinberg, who participated in the examination of Father Schmidt Sunday, yesterday said that in his belief the priest was shamming insanity.

“He appears to me to be a man who is perfectly sane.” said the Coroner, “He is an Unscrupulous man with a master mind. Think of a man who was able to qualify for the priesthood, who was a forger of great skill, mechanic enough to coin money, who dabbled in medicine, and who was the possessor of the ability to commit the crime with which he is charged. A man of his versatility easily could sham insanity in his own defense.”

The arrest of “Doctor” Earnest Arthur Muret and the linking of another charge against Hans Schmidt, the Roman Catholic priest who confessed he was the murderer of Anna Aumuller, was brought about by the persistency of Inspector Joseph Faurot.

Late Monday afternoon, Faurot with Lieutenant James O’Neill, while examining the effects of Schmidt in the St. Joseph’s parish house, found a copper engraved plate of a $20 gold certificate. In addition Faurot came across receipts for the rent of a flat at No. 516 West 134th street. These were in the name of George Muller. Pictures, which greatly resembled the priest, along with pictures of a young girl, apparently of German birth, also were found.

A receipt which showed that $38 was paid by Schmidt to a Dr. Earnest Arthur Muret, of the Alpha Apartment House, of No. 391 St. Nicholas avenue, was among the effects. The writing resembled in some degree, other missives found from Muret.

Since the arrest of Schmidt and from the discoveries in his room, which tended to show that he was implicated with some physician in illegal practices the find of a counterfeiting plant caused the inspector to investigate the flat in West 134th street. Detectives Cassassa, McKenna and O’Neil were sent to the flat. They waited until a few minutes before midnight, and then forced a rear window and thus gained an entrance. The card on the door bore the name “George Muller.” Inside they found an elaborate counterfeiting plant.

There was no furniture in the place. A camera, press type, inks, chemicals for the development of negatives, mechanical tools of the most delicate kind, copper plates and the finest of linen paper were found, in fact, everything necessary to produce counterfeit United States currency. The shades of all the windows were drawn, with the exception of those of the bathroom which was used by the counterfeiters as a “dark room.”

Scattered about the room, as though they were in constant use, were found books pertaining to photography, engraving and the manufacture of paper – such literature as might be placed in the library of an expert on any of the subjects represented. 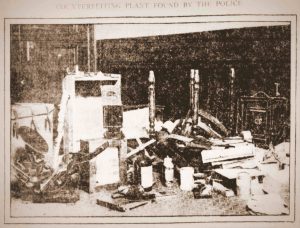 While the other detectives were busy rummaging through the flat, Detectives Phelan and O’Connell went to see Muret at his St. Nicholas avenue office. They asked him to examine their teeth, confirming their suspicions, the detectives who visited the 134th street flat communicated with the women who rented it, Mrs. Margaret Bowyne and the janitress, Margaret Rutlage. These women were taken to the “doctor’s” office, where they positively identified Muret as the man to whom they rented the flat in June. Schmidt was with him at the time, they said.

“Doctor” Muret’s practice at his St. Nicholas avenue office was spoken of yesterday as remarkable. Many persons with dental appointments called at the office yesterday. One patient said Muret did $40 worth of work on his teeth and was not yet through with the job. City detectives, aided by P. A. Rubano and Morris Manassa, United States Secret Service agents, spent the day in going over the personal papers of the “dentist.”

His office was well furnished. It contained a library, principally works of fiction and books n professional subjects that any regular practitioner would be proud to boast.

After her discharge in the Harlem court yesterday, Bertha Zech, Muret’s servant and office assistant returned to her home in the St. Nicholas avenue house. She was employed by Muret in December, she said, through an advertisement in a newspaper. She came from the northern part of Germany a few weeks before Muret employed her. She appeared to be surprised when asked how a photograph of herself came into the possession of Schmidt. This was a photograph which was found with several of Muret in the priest’s room at St. Joseph’s. It shows her in a white dress.

“There were several women who came to the house at night,: she said. “Father Schmidt was a frequent caller, and he often stayed late. I do not know anything about the affairs of Dr.Muret, nor of Father Schmidt. I stayed in my room when my work was done.

When told that many of the tenants complained to the janitor of the late hours at which the bogus dentist entertained his visitors and that when she was told about this by the janitor she replied that “the Father was the doctors brother.” Miss Zech said she never told the janitor any such story.

The first time she saw the priest, she said, was when he came to the office to have his teeth fixed.

A postcard written in English and signed “Hans” evidently from Father Schmidt, was found among the effects of Muret. It was of the souvenir type, with a picture of Napoleon, under which was written: “Impossible is only found in the fool’s dictionary.” On the reverse side was written: “Let us pray that our children will have rich parents.” It was dated May 23, 1913, and posted in a Harlem sub-postoffice station. Real estate pamphlets also were found in quantities.

The telephone records made from the apartment of Muret show that frequent wire conversations were held between the apartment and the parish house in which Schmidt lived. There were some telephone called made to wholesale liquor stores in the vicinity and to the Colonial Hotel, at 125th street and Eight avenue. John Tonjes, the owner of the hotel, said he did not know Muret or Schmidt, nor could be account for the telephone calls.

One call was made August 28, to Dr. Arnold G. Leo, of No. 506 West 125th street. Dr. Leo last night said he knew Muret in a professional way, and also had called the priest to the bedsides of some of his patients. He came there September 2 or 3, he was not sure, to have a cut finger treated. It was at midnight of September 2 that Schmidt committed the murder and began to dispose of the body, after cutting it in pieces. Dr. Leo said Schmidt’s hand was much swollen. Schmidt explained to him that he got the cut by crushing a drinking glass. The cut was on the index finger of his right hand. Muret came to Dr. Leo’s office and was treated for an ear trouble. The telephone call of August 28 was accounted for by Dr. Leo. On that day he telephoned to Muret in regard to the administering of gas to a patient. Another call, the significance of which could not be learned, was made to the District Attorney’s office – Franklin 2204 – on August 13.

Another Call About Patient

Dr. Aldred Michaelis of No. 15 West 88th street, who was called on the telephone on August 25, last night could not tell the nature of the call, but he said that in all probability it related to a patient Muret was treating. William F. Reith, a policeman of the West 125th street station, who seeks credit for the arrest of Muret, was in the Harlem court yesterday morning when the alleged counterfeiter was arraigned. He said he called the attention of Faurot to the acquaintanceship of Muret and Schmidt. He was in court to identify Muret, but he was not called. According to the policeman, he saw Father Schmidt and Muret in the office of the agent of the flathouse in West 124th street on June 30, he said, was then dressed as a civilian. The policeman is a member of St. Joseph’s Roman Catholic Church, of which Schmidt was assistant pastor. He said he readily recognized the priest.