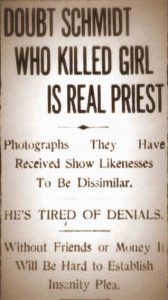 Photographs They Have Received Show Likenesses To Be Dissimilar.

Without Friends or Money It Will Be Hard to Establish Insanity Plea.

Further doubt as to the identity of Hans Schmidt, the murderer of Anna Aumueller, was aroused today by the receipt of a cablegram from Berlin stating that the police of Frankfort-on-Main, Germany, on comparing a photograph of the Schmidt under arrest here with on in their possession of Hans Schmidt, the priest of Mainz, stated that they do not believe the photographs represent the same man. The cable dispatches state that the likenesses are sharply dissimilar.

Relatives of the real Hans Schmidt in Germany, who have just received photographs of the man in the Tombs, say these pictures do not resemble the man they knew. These dispatches serve to confirm a widespread belief in New York that Schmidt is an impostor.

Schmidt Tired, He Says, Of Telling The Truth.

Schmidt was told today of the news from Germany which would appear to discredit his claims that he is Hans Schmidt, the priest ordained in 1907 in Mainz. He said he was getting tired of reiterating the truth about himself and called attention to the fact that Father Franz Marker, now of Techny, Ill., who went to school with him in Mainz, has identified him completely in the Tombs four different times in the last three days.

Coroner Feinberg announced today that he had issued summonses for eighty of the most prominent citizens of New York, from among them he will select twelve to act as jurymen in the inquest into the death of Anna Aumueller which is to be held on Friday, Oct. 3. The Coroner refused to give out the names of the eighty, stating that he could not make them public until the summonses had been served.

It is intimated around the District Attorney’s office that unless Schmidt shows more pronounced signs of insanity that were found by Drs. Carlos MacDonald and William Mabon, the alienists who examined him yesterday afternoon, he will be reported as mentally fit for trial for his life. However, the two alienists have not submitted their report to the District-Attorney. Indeed they have not completed their examination. They are to be assisted in the rest of their work with Schmidt by an alienist who can talk German.

Alphonse G. Koelble, Schmidt’s counsel, while he is thoroughly satisfied that his client is insane, is not sanguine that his belief will be endorsed by the prosecuting authorities. Mr. Koelble realizes that the police are anxious to send Schmidt to the electric chair.

In case Schmidt should be brought to trial, his only defense is insanity. To maintain such a defense it will be necessary to employ experts. Experts cost money. Schmidt has no money and no friends. While Schmidt is ordinarily calm over the prospect and expresses the wish that he may be put to death as soon as possible, the outlook is not cheering to Mr. Koelble, who has offered his professional services as a matter of charity, believing that a mental unfortunate, such as he considers Schmidt, should have at least the benefit of legal advice.

A party of five blooming, radient and well dressed young women, ranging in age from probably nineteen to something about twenty-five, called at the Tombs today and asked to be shown through. A guide escorted them about, but when they returned to the outer office they complained to Warden Fallon that they had not seen Schmidt. The warden sent them back again, with orders that they must not be allowed to talk to the prisoner. These orders didn’t please the young women and they flounced away.

“Why did you want to see this murderer and talk to him?” the girls were asked.

“Don’t you think it was rather a morbid instinct than curiosity that inspired you?” asked an elderly volunteer inquisitor.

“Call us morbid if you like,” replied one of the girls. “We have a right to visit him if we want to.”

They said they are not members of the parish of St. Joseph in Harlem to which Schmidt was attached as a priest. Warden Fallon said these are the only women who have asked to visit Schmidt, but he anticipates that there will be others.

There was a rumor current in the Tombs today to the effect that Schmidt had received a letter from Germany stating that his parents would be in New York next Tuesday. Schmidt was asked if he had received such a letter.

“I have had no communication from my parents.” he replied. “I don’t want then to come here.”