Breaks Down at Sight of Dead Girl’s Picture 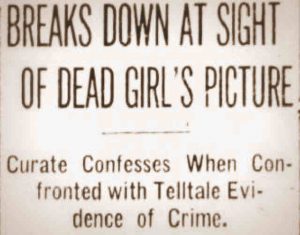 Breaks Down at Sight of Dead Girl’s Picture

Curate Confesses When Confronted with Telltale Evidence of Crime.

The confession made to Inspector Joseph Faurot, Detective Cassassa and Assistant District Attorney Deacon Murphy and which was taken in stenographic notes by James O’Connell, of the inspector’s staff, has not yet been signed by Father Schmidt. It was taken during the course of a running conversation with the priest, which was actually begun early on Sunday morning in the parish house of St. Joseph’s Roman Catholic Church, Morningside avenue and 125th street.

It was here that Inspector Faurot, Cassassa and O’Connell, accompanied by Anna Aumuller’s cousin, Joseph Igler, who was being taken to the flat on Bradhurst avenue to identify certain of his relative’s effects, stopped to question the young clergyman as to his acquaintance with the former servant in St. Boniface’s rectory, in East 47th street. On being admitted to the house, Inspector Faurot, who had worked on the case for twenty-four consecutive hours, asked Father Huntman to be permitted to see Father Schmidt.

It was after midnight and Schmidt had retired. He was called by one of the servants and soon appeared. The inspector introduced himself, Cassassa and the stenographer. Igler was in an adjoining room.

“So soon as the priest entered the room and confronted us his general demeanor struck me,” said Inspector Faurot, when relating the details of the confession. “He stood erect, wavering a bit, and came over to where we were sitting. We asked him to tell us where Miss Aumuller was. At first he was steadfast in his denial of knowing her, but as our examination progresses and he was shown a picture of her he broke down, and with tears in his eyes said: ‘Yes, I killed her, because I loved her.’

“He sobbed bitterly for some time. When he composed himself he asked permission to leave the room. Suspecting that he might do himself harm, I asked him to submit to being searched. Secreted on his person I found a razor, which was taken from him. At first he denied that he had carried it for any ulterior purpose, but finally admitted that he ‘wanted to end it all.’

“I asked him if he would accompany us to the house, and he readily agreed to. We were about to leave when I recalled that he was still attired in his clerical garb, and I asked him to change his clothing. From the parish house we then went to the apartment house, No. 68 Bradhurst avenue.

“Riding in an Eighth avenue surface car, the priest, who was technically under arrest, seemed perfectly composed. He told us that he had been married to the girl. He said he obtained a marriage license at the City Hall in February, and ‘I myself performed the marriage ceremony.’

“Arriving at the flat, which is on the third floor of the Bradhurst avenue house, we entered with a key furnished by the father himself. The house had been guarded by Detectives O’Neill and Galvin for the last five days. We got our lead from George Sachs, the second-hand furniture dealer, who had his store at Eighth avenue and 147th street, about two blocks from the four-room flat which, I am of the belief, was purposely hired for the sole purpose of doing away with the unfortunate young woman.

“It was here that the detectives working on the case found the flat where the iron bed, mattress, chair and two peculiarly designed pillow coverings, size 27 by 29, were delivered on August 28. There were only twelve of these sold by the Robertson-Roders factory, in Newark. From the management we located George Sachs. Sachs was unable to say to whom the pillows were sold. We got from him, however, a list of all the sales he had made of pillows selling for the same amount of money – 80 cents.

“All purchasers were accounted for with the exception of the person who bought these particular two. The rest we found were of the ordinary kind.

“Saturday night the janitor of the apartment house, Carlton Brookes, told us that he rented the apartment to Hans Schmidt on August 25. He paid $5 down and the balance, $14, on August 28. Saturday night we decided to enter the flat and search it. The bed, which was purchased from Sachs, was found bare of any furnishings. Two trunks in the room were forced. The effects revealed the identity of the girl, also a picture of the priest. The letters and post cards were addressed to the girl at the parish house of the St. Boniface Church, 47th street and Second avenue. Here we had the pictures of both identified.

“When the young priest entered the flat he showed signs of weakening. Little persuasion was needed, however, for him to continue relating the details of the killing. He said he killed the girl while she slept.

” ‘I came into the house shortly before midnight.’ he said. ‘and while she slept cut her throat. She did not suffer any torture. After her death I dragged her body to the bathroom adjoining, put the body into the bathtub and dismembered it. I made five packages, wrapping up the sections of the body in the bed clothing which I took from the bed. I inclosed pieces of stone found in a vacant lot between Seventh and Eighth avenues in 144th street, where I had disposed of the mattress by burning on the night of the 2d.’

“He told us that the saw, an ordinary fine-cut carpenter’s tool, and a butcher’s knife were bought in Centre street. These were found in one of the trunks earlier in the night. The tools were blood stained. On the handle of the saw were found blood stains, as well as finger prints.

“The absence of other evidences of such a bloody murder were explained by Schmidt, who said he had thoroughly scrubbed the bedroom floor, the bathroom and the porcelain bathtub. Cleaning powder and a scrubbing brush, as well as several rags, were found in the kitchen. From the apartment we then went to the vacant lot in West 144th street. Schmidt pointed out the spot where he had set fire to the mattress. This he said he had dragged through 145th street, a block from Bradhurst avenue, the south to 144th street and half way down the block. This was about dusk on the night of September 3.

“It was been securely wrapped. Less that fifty feet from where the mattress was burned is a Gospel tent, where the Evangelistic Committee of No. 541 Lexington avenue, holds religious meetings nightly. There he pointed to a quantity of cotton batting still lying in a small pile. He seemed more concerned over his fear that we might step on it than he did for the startling revelations he was making against himself.

“He said that after disposing of the mattress he returned to the flat, to begin disposing of the body, which was wrapped up ready to carry away. The outer covering consisted of tar paper, which, he explained, was bought in the neighborhood. He carried his grewsome [sic] packages one at a time on the same night on Eighth avenue surface cars, transferring at 125th street for the Fort Lee ferry. From the bow of the boat he threw them overboard.”

At the West 152d street police station, where Schmidt was later taken and searched, a wedding ring and an opal were found in his pocket, both of which he admitted having taken from the fingers of the dead woman. He was lined up with four other men who closely resembled himself, Faurot said, and was identified by Sachs, the second-hand furniture man, who sold to him the telltale ticking pillows.

A revolver and a box of cartridges were found in one of the trunks. The gun was of foreign make, and, according to the inspector, was the property of Schmidt. According to the agent who rented the flat, Schmidt gave the name of Hans Schmidt, and said the woman he was renting it for was just starting housekeeping. This was said as an explanation for the scant furniture, which was moved in on August 28, when the balance of the rent of $14 was paid. None of the thirty families in the apartment house could recall having seen or heard anything out of the ordinary since the flat was rented by Schmidt. There was no witness, so far as the police could ascertain, to Schmidt carrying his burden from the house.