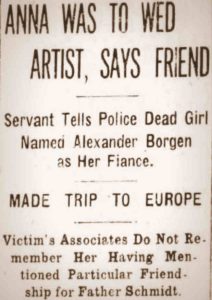 Made Trip to Europe.

Victim’s Associates Do Not Remember Her Having Mentioned Particular Friendship for Father Schmidt.

Annie Hire, a servant employed as St. Boniface’s rectory, at Second avenue and East 47th street, said last night that there was another man besides Father Schmidt who had played an important part in the murdered girl’s life. Miss Hirt said he was Alexander Borgen, an artist, who lived somewhere in Ohio. Annie Aumuller told her the day before she left the employ of Father Braun, August 30, that she was to be married the next day to Borgen.

“I never saw Borgen,” said Annie Hirt, “although Annie often talked about him, and had told me she loved him. He often visited New York, staying at a small hotel, the name of which I have forgotten. Annie was in his company on her days off whenever he was in town. I never saw Father Schmidt, either. I came to work at the rectory after he left to go uptown.

“Annie seldom mentioned the name of the priest to me, and I cannot explain her presence in his flat the night she was murdered. She never said anything to me to indicate that Father Schmidt was jealous of the attentions paid by Borgen.”

Miss Hirt, whose parents live at No. 300 East 85th street, was seen at that address last night. She left the rectory late in the afternoon to visit her parents, after telling the detectives all she knew of Anna Aumuller’s life and her relations with the priest and the artist.

“I once saw a photograph of Borgen.” Miss Hirt stated. “He had dark hair and a beard and wore heavy rimmed glasses. I was told by Anna that he was of medium height, spare, and was rather foreign in appearance. She also told me he was born in the same village in Hungary where she was born and that she had known him since she was a little child. Before she came to this country two years ago he wooed her, but I understand at the time Anna did not pay particular heed to his suit.

“In August of last year, I believe it was, Anna went to Europe. While there she met some one with whom she fell in love. She mentioned it to me after she returned to the St. Boniface parish house to work. Whether Borgen had also returned to Vienna, where Anna spent considerable time, I do not know. I believe, however, that Borgen was the man with whom she was infatuated.

“The day before Anna left she said to me: ‘I am going to be married to-morrow and go to Ohio to live.” I asked her whom she was to marry, and she told me ‘Borgen.’ She had $100 saved, she said, and she showed me a bankbook. She seemed bright and happy the day before she went away – more cheerful than she had been for many weeks.”

Miss Hirt said also that Anna Aumuller had a mother and sister living in Vienna and that the dead girl had occasionally received letters from them. She had a cousin living in New York, named Igler, with whom she lived for a time after she came to New York, two years ago.”

According to Miss Hirt, Anna received occasional letters from the artist. The police had a picture of him, she said, as they had shown it to her and asked her to identify it.

Joseph Igler, of No. 428 East 70th street, the cousin of the slain girl, was able to give the main facts of her life yesterday. She was born in Oedenburg, Hungary, he said, and was about twenty years old. He said:

“When Anna first came to New York from Vienna she came to our house and lived with my wife and family in 135th street, The Bronx.

“After she had been with us a number of months she had some little disagreement with us and went to work in the rectory of the St. Boniface Roman Catholic Church. That was late in December, 1910.

“She worked in Father Braun’s household for a year or so then she left because she said she could not get along with the woman who was in charge of the establishment during the absence of Father Braun’s regular housekeeper.

“She had saved some money, we learned, and later she surprised us by announcing she was going to Europe. That was July last year, and in August she sailed and did not come back until October.

“When she came back she told us she had met a man with whom she had fallen in love, but she did not tell me his name. I do not recall her every [sic] saying anything about Alexander Borgen, who I understand is said to have at one time been Anna’s fiancé. I did not know that Anna was intimate with the priest.”

The Rev. Dr. John S. Braun, pastor of the Roman Catholic Church of St. Boniface, a small brownstone and brick structure at Second avenue and East 47th street, issued yesterday the following statement regarding the principals in the murder tragedy:

“The Rev. Hans Schmidt came from Trenton, N. J., to this parish as an assistant priest on December 31, 1910, and remained as such until the fall of 1912. He was considered eccentric.

“Anna Aumuller was recommended for service in our parish by a maid then in the house. She came here a week before Christmas, 1910, and left some time in the summer of 1911. She returned as a maid on Thanksgiving Day, 1912. At the time she said she was about to be married and go to Ohio.”

“Father Schmidt, so far as I know, never had any trouble with the Catholic Church while he was in Germany, before coming to this country. He never mentioned to me the fact, as has been stated to-day, that he was arrested for posing as a priest or for violating any rules of the Church. Of course, I did not investigate his record, but so far as I am aware it was clear.

“He came to this parish to act as assistant priest, and did so. He was qualified to perform all offices of the priesthood, and while here he heard confession, conducted services, officiated at weddings and funerals, visited the sick and administered the rites of the Church when occasion demanded: in short, did all that a priest is called upon to do.”

All Father Braun knew of the dead girl, he said, was that she came from Germany a little more than two years ago and obtained employment in the rectory without credentials, because her appearance impressed him and his housekeeper. In the summer of 1911, he added, he want abroad with his sister, and during that time Anna quarrelled with the housekeeper in charge, who has since left the rectory, and she (Anna) left.

Later she explained the difficulty and at her request was given back her old position as maid.

“Father Schmidt was here when Anna was,” Father Braun continued, “but left in the summer of 1912. He packed his trunks and told us he was going to Germany to visit – Anna at that time as in Germany, I believe – but changed his mind to accept a position as an assistant priest at the St. Joseph’s Church in 125th street. I do not recall that he ever came here to see Anna or communicated with her by telephone.

“Anna told us on August 30 she was about to leave, to be married and live in Ohio. We did not question her as to the identity of her husband, and she volunteered no information.”